AHOSKIE – Ridgecroft School avenged a year-old loss to the team that knocked them out of the 2017 NCISAA state championship series by claiming a 14-6 victory over Oakwood here on Tuesday in the first round of the softball playoffs.

The Lady Rams opened the scoring with one run in the bottom of the second inning. Shelby Hoggard reached second base after a dropped third strike and a wild throw to first base. She would score on Grace Vaughan’s RBI double for a 1-0 Ridgecroft lead after two. 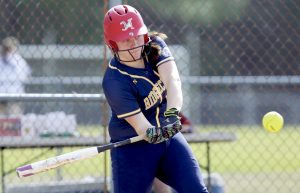 Shelby Hoggard eyes a pitch in an earlier Ridgecroft School softball game. Hoggard had one of her team’s 15 hits as the Rams powered their way to the independent schools’ Final-4 with a 14-6 home field win over the Oakwood School. William Anthony Photography

Oakwood tied the score with a run in the top of the third inning, knotting the contest at 1-1.

Ridgecroft scored three runs in their half of the inning. Skylar Brown singled and went to third on a double to left field by Reagan King. Both runners scored on Mandy Spence’s two-run triple to left. Spence would later score on a Hoggard RBI base hit, giving the Rams a 4-1 edge after the third full inning.

Ridgecroft then added six runs in the bottom of the fourth. After Sydney Lane singled, she went to third on a Camryn Joyner two-bagger. King walked to load the bases and Lane and Joyner would score on a Courtney Taylor two-RBI single. King and Taylor then scored when Spence banged out her second extra-base hit: a two-run double. Spence went to third when Hoggard reached on an error, and scored on another error. After Hoggard scored on Vaughan’s RBI single to right, the Eagles were looking up from a 10-1 hole, and this was after four innings of softball.

Oakwood tried to climb back into the game. They scored three runs in the top of the fifth to only trail by six runs, 10-4.

But Ridgecroft nailed the coffin shut with three runs in the bottom of the fifth. Singles by Alana Hull, Taylor, and Spence loaded the bases before Hoggard drew a bases-loaded walk and Isabella Woodard had a two-run double. It was a nine-run Rams lead, 13-4, after five complete.

Oakwood got two more runs in the top of the sixth, but Ridgecroft closed out the scoring with their 14th run in the bottom of the sixth. It began when Vaughan was hit by a pitch, pinch-runner Clayson Spence went to second on a Lane single before Joyner walked to load the bases. Spence then scored when Skylar Brown drew a base-on-balls.

Oakwood got a runner in scoring position in the top of the seventh, but that runner was thrown out trying to take third for the final out of the game.

Mandy Spence went the distance for the win, allowing six runs on seven hits with 11 strikeouts.

Ridgecroft had 15 hits. Mandy Spence led the way with three hits – two for extra bases – and four RBI. Taylor, Vaughan, and Lane had two hits apiece, while King, Hoggard, Woodard, Hull, Joyner, and Brown had one hit each.

The Rams improve to 13-7 and head to Oakwood on Friday where they will face top-seed and defending champion, Halifax Academy. Fellow TIC member, Lawrence Academy will meet Cape Fear Christian in the other semi-final at noon.

WASHINGTON, DC – While the sky was filled with clouds and rain on Mother’s Day this past Sunday in the... read more