AHOSKIE – Doug Cobbs may be retired, but he’s never forgotten and Ridgecroft School wants to ensure the latter never happens.

Ridgecroft, where Cobbs taught and coached for 30 years before retiring the conclusion of the 2020-2021 school year, will host the inaugural Doug Cobbs Scholarship Tournament on Dec. 1-3. 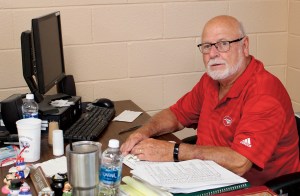 Even after hanging up his coach’s whistle, Doug Cobbs continued to serve Ridgecroft School as a teacher until his retirement last year. The school will honor his legacy by hosting the Doug Cobbs Scholarship Tournament on Dec. 1-3. File Photo / Holly Taylor

Other than Ridgecroft, other schools participating in the varsity and jayvee girls and boys tournament are Halifax Academy, Northeast Academy, Lawrence Academy, Pungo Christian Academy, and Southampton Academy. Games will be played at Ridgecroft and Lawrence.

However, after heartfelt conversation with Joe Murray, the Brantley family, and The Roanoke-Chowan News Herald, Ridgecroft is now transitioning the “Lt. Nick Brantley Scholarship Tournament” into the “Doug Cobbs Scholarship Tournament.” Everyone involved in hosting the tournament in years past is happy to see the tournament continue and transition in this way. A variety of factors including retirement, moving, etc. have been instrumental

in this transition and everyone is excited to see how the “Doug Cobbs Scholarship Tournament” will grow and succeed in the years to come.

All tournament sponsorship money and donations of any size will benefit scholarships awarded at the tournament. Ridgecroft School holds these funds and disburses scholarship money.

All sponsorships are due by Nov. 22 to be included on t-shirt and signage.

Donations of any size are also welcome and encouraged.

Doug R. Cobbs, Sr. was born in Richmond, Va. and attended John Marshall High School. He played multiple sports during his high school career, a theme he would carry throughout his professional career.

He attended Virginia Commonwealth University and received a B.S. degree in Health and Physical Education. After 14 years as a teacher and coach of multiple sports at Fredrick Military Academy, he moved to Ridgecroft School, where he spent the next 30 years as a teacher, coach, and Athletic Director.

During his tenure at Ridgecroft, he taught Health, P.E., and History. He coached soccer, boys basketball, girls basketball, and softball.

He served the North Carolina Independent Schools Athletic Association (NCISAA) on the Board of Directors/Board of Managers for 25 years. He was a part of the growth of the NCISAA into three divisions, the inclusion of 7th graders in varsity sports, and was the Sport Chair for Softball as it transitioned from slow pitch to fast pitch.

Coach Cobbs has always put the kids first and has always been a voice for the 1A schools.

In 2015, the NCISAA honored Doug Cobbs and his career by naming its Distinguished Service Award on his behalf.