AHOSKIE – Over the years, Ridgecroft School and Pungo Christian Academy have locked horns in quite a few epic battles on the basketball court.

Friday night’s match-up in the championship game of the inaugural Doug Cobbs Scholarship Basketball Tournament didn’t live up to that past history.

Tournament MVP Sawyer Chamblee scored a game-high 18 points and was joined in the double-digit scoring column by All-Tournament selections Justin Peterson (16) and Caleb Porter (12) as the Rams routed the rival Raiders, 64-29, to claim the tournament’s first place plaque. 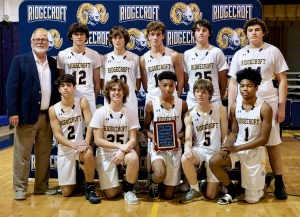 The Rams never trailed, breaking an early 2-2 tie with a 10-0 run that started and ended with a trey each from Edwards and Chamblee.

That 10-point spread (18-8) remained intact later in the period before Pungo drew to within five (18-13) thanks to a deuce from Josh Reynolds and a trey by Lee. But Ridgecroft closed the opening quarter on a 6-0 run fueled by a basket each from Revelle and Chamblee plus a pair of free throws by Peterson.

The Rams defense limited Pungo to only one successful field goal in the second quarter. Meanwhile, Chamblee and Porter tallied three hoops each and the rout was on as Ridgecroft took a commanding 43-17 lead into the locker room at halftime.

That advantage reached 30 points (47-14) less than 90 seconds into the third quarter thanks to a basket each from Porter and Peterson. Peterson would go on to add two more baskets in the period, as did Brown to aid the Rams in building a 58-22 lead heading into the fourth quarter.

The lead reached 40 (62-22) thanks to Chamblee’s easy basket following a steal and assist from Blayden Miller.