All that Tarheel Independent Conference baseball champ Ridgecroft School needed were two wins to make the NCISAA state championship series at Wilson’s historic Fleming Stadium. The Rams were the third seed and even received a double-bye through the first two rounds.

But it wasn’t to be.

Ridgecroft faced a buzz-saw in Wayne Christian School on their home field here Saturday, and the sixth-seeded Eagles tripped up the Rams 16-3. 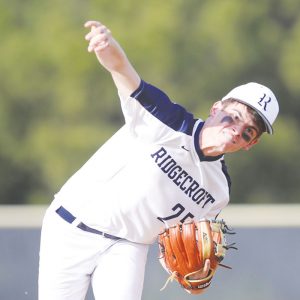 Ridgecroft School’s Bryce Stevens exerts as he delivers a pitch in a prior game. Stevens scored the first run for the Rams Saturday in the NCISAA 1A baseball playoffs, but Wayne Christian School came back to pull off the upset 16-3. | William Anthony Photo

The Rams got on the board first with a pair of runs in the bottom of the first inning. Bryce Stevens, David Basnight, and Wyatt Whitley drew back-to-back-to-back walks to load the bases, with pinch-runner Wyatt Liverman running for Basnight. On a dropped third strike on Zeb Askew, the WCS catcher threw to first-base and Stevens stole home for the first run of the contest. Luther Glover then walked to re-load the bases. The Rams tried to score on a groundout back to the pitcher, but the Eagles threw home to force Liverman for the second out. But, facing the next batter, Whitley was able to score on a wild pitch and the Rams led it 2-0 after the first.

The Eagles evened the score in the top of the second at 2-2 before the Rams went back in front in the bottom of the frame. With two outs, Stevens poked a shot to centerfield. After Basnight and Whitley both walked to load the bases, Askew was hit by a pitch for an RBI that forced-in Stevens with the go-ahead run and Ridgecroft was back on top, 3-2.

But the rest of the game was all Eagles.

Wayne Christian scored five runs in the top of the third to take a 7-3 lead after three complete. The Eagles then got two in the fourth and another in the fifth for a 10-3 bulge.

In the bottom of the fifth, Zeb Askew and Glover walked – part of nine base-on-balls issued to the Rams in the game – but the home-team couldn’t cash in and it remained a seven-run advantage for the Eagles.

Wayne Christian got its final six runs in the top of the sixth inning for the 13-run final advantage with the game shortened to six innings.

Stevens’ poke turned out to be the Rams’ only hit of the game. He was also on the losing end of the decision as Ridgecroft used three more pitchers in relief: Boone Barkley, Lane Slachta, and Basnight.

The Rams ended an outstanding season with a record of 15-4-1.