AHOSKIE – For the first time in 21 years, there is a new regular-season baseball champ in the Tarheel Independent Conference.

Lawrence Academy’s two decade-long reign came to an end Thursday as Ridgecroft School scored five runs in the fourth inning and powered on from there for an 11-3 win in the season-ender for both clubs before this week’s tournament. 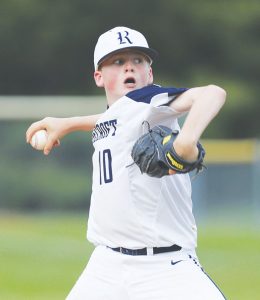 David Basnight pitched four innings for Ridgecroft School on Thursday and picked up the win as the Rams downed Lawrence Academy 11-3 to dethrone the Warriors as TIC regular-season champs for the first time in 21 years. | Staff Photo / Gene Motley

Scoreless through the first two innings, the Warriors got on the board first with a pair of runs in the top of the third. Sawyer Mizelle drove in Gavin Smithwick with the first run, and then Charles Atkins’ double plated Mizelle for a 2-0 start. The Rams got one run back when Zeb Askew doubled home Wyatt Whitley to make it 2-1, Warriors after three complete.

The Rams then pulled away for good with five runs in the fourth inning. A sacrifice bunt by Boone Barkley scored the tying run for Ridgecroft, then a pair of errors scored two more separate runs, and finally, Wyatt Whitley singled on a 2-2 count, scoring two more runs.

Ridgecroft nailed it shut with five runs in the bottom of the fifth inning. The big inning came thanks to singles by Whitley and Lane Slachta, a fielder’s choice by Finn Dunn, and an error on a ball put in play by Bryce Stevens.

David Basnight toed the rubber for the win. He surrendered two runs on three hits over four innings, striking out two and walking zero; before giving way to Stevens in relief.

Evan Swain started for Lawrence. He went three and a third innings, allowing six runs on three hits and striking out three. Joseph White, Sawyer Mizelle, and Tayloe Powell each contributed in relief for the Warriors.

Each team had seven hits. Whitley led the Rams with three hits in three at bats and the same on the Lawrence side by Atkins. Ridgecroft also had nine stolen bases.