HOBGOOD – Three Ridgecroft School hurlers combined on an 8-0 shutout of Hobgood Academy on Monday, keeping the Rams in the thick of the Tarheel Independent Conference baseball race.

The Rams got on the scoreboard first when Wyatt Whitley came home courtesy of a bases-loaded walk for a 1-0 Ridgecroft lead. 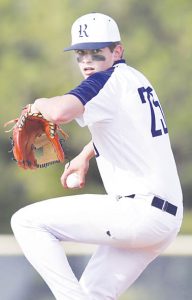 The Rams next scored five runs in the fifth inning. They came on singles by Zeb Askew and Grayson Joyner, an error, and a double by Whitley. It was 6-0 Rams after five complete.

Jack Jones’ RBI single in the sixth inning scored Boone Barkley for the Rams’ seventh run, and Basnight delivered Jones in that same inning with Ridgecroft’s eighth and final run.

Bryce Stevens got the start for the Rams and was cruising. He allowed one hit, a single by Alex Hanff, and zero runs over five innings, striking out nine and walking one. Lane Slachta pitched a scoreless sixth and in the seventh inning Barkley induced a groundout from Jordy Martinez to finish off the game.

Askew, Luther Glover, Whitley, Jones, and David Basnight all had one hit each to lead the Rams at the dish.