Monday, however, the Warriors struggled to put runs on the board while the Rams feasted on LAW pitching and as the temperature fell, so too did Lawrence, as Ridgecroft claimed a 15-3 victory.

Ridgecroft opened the scoring in the first inning. With two out, Luther Glover and Lane Slacta smacked back-to-back base hits, followed by Wyatt Whitley crushing an 0-1 pitch deep to left field, scoring both for a 2-0 Rams lead. 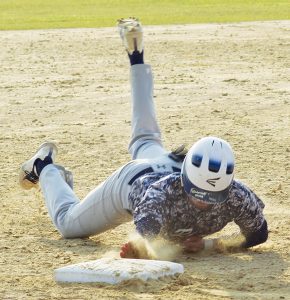 Ridgecroft School’s Luther Glover gets a face-full of dirt as he sprawls out on a successful steal of third base ahead of the throw in Monday’s game with Lawrence Academy at Merry Hill. The Rams posted a rare win over the Warriors 15-3 to remain unbeaten in conference. Staff Photo by Gene Motley

Lawrence halved that in their portion of the first, Sawyer Mizelle walked, sent to third on Charles Atkins’ double into the gap in left centerfield, and then scored when Evan Swain reached on an error. It was 2-1, Rams, after one full inning.

Ridgecroft tacked on another run in the top of the third when Slacta singled down the third-base line, went to third on Glover’s double, and came home when Whitley reached on a fielder’s choice, leaving the Warriors trailing by two, 3-1.

Four more Ram runs were plated in the top of the fourth, the big blow coming on Blake Birdsong’s two RBI double that made it 7-1. Two additional Ram runners crossed in the fifth; one on a balk, the other on a groundout.

Lawrence struck back for a run in the bottom of the fifth. Atkins singled to left, and then legged it out to home plate on a deep base-knock by Joe “Cheese” White. But the Warriors were looking up from a 9-2 hole.

Ridgecroft made it academic with six runs in the sixth inning. Treyce Myers, Slacta, Glover, Whitley, and Birdsong all contributed in the big inning with RBIs. Lawrence got one final run in the bottom of the frame as Drew Pippins scored on a base hit by Brian Hughson.

Slacta picked up the win, going three innings and surrendering one run on one hit and six strikeouts, despite four walks. Bryce Stevens, Wyatt Liverman, and Boone Barkley also pitched for Ridgecroft. The Rams tallied 19 hits for the game. Glover and Whitley were both 4-for-5 with eight RBI between them. Stevens, Slacta, and Birdsong also collected multiple hits for Ridgecroft.

“We’ve really been working the batting cage a lot lately,” said Basnight. “I’m proud of the way my seniors stepped up today; we’ve got two more (TIC) games this week so I can use my pitchers again.”

Sawyer Mizelle started for Lawrence and he allowed six runs on seven hits over three innings, striking out five. White and Tayloe Powell came on in relief, giving up nine runs on nine hits between them. Charles Atkins led LAW at the dish with two hits in two at bats.

Ridgecroft’s win leaves the Rams (3-0) a half-game behind Northeast (4-0) for the league lead while Lawrence falls to 2-2 in the TIC.

AHOSKIE – Hertford County pounded out 10 hits to back up the strong pitching performance of Trent Munford and Trevor... read more