The win avenged an earlier regular-season loss the Lady Rams suffered back in January on the road in Wilson by one point, 25-24.

“This was a good opening round state playoff win,” said Rams coach Susan Oliver. “The girls worked hard and we made our free throws at the end of the game.” 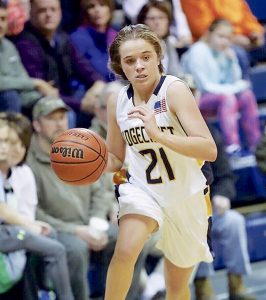 Much as they’d done in the TIC Tournament championship game against Pungo Christian, Ridgecroft was deadly from the charity stripe, closing out the game making 10 of 14 foul shots.

Lane opened the scoring with a lay-up and a pair of free throws that helped stake Community to a 6-0 lead before Rose’s short jump shot put the Rams on the scoreboard. Trailing 8-2, King got a steal for one score and converted another lay-up as part of a 7-0 run the Rams used to close out the first quarter. Olivia Daly made a free throw down the stretch and it was 9-8, Rams, after one period of play.

Scores by Emma Wood Boone and Sydney Lane in the paint helped keep the Rams in front, 13-11, before Community tied it for the first time, 13-all. Rose then hit her first three-pointer of the game for a 16-13 Rams edge. After tying it again at 18-18, Community used four more points from Morgan Lane to claim a four-point halftime lead, 22-18.

Morgan Lane opened the second half with a put back right before Alexus Langley let fly a triple from long-range and the Rams were now in a nine-point hole, 27-18. They trailed by eight, 28-20, before Emma Lane scored twice to spark a 9-0 run that re-captured the lead for the home team, 29-28. Community scored from the baseline, 30-29, and took what would be their last lead of the game. Rose and Emma Lane scored again off turnovers and Ridgecroft held a three-point edge, 33-30, headed to the fourth quarter.

In the final stanza, the Rams still led by three, 34-31, when Rose buried another trey to give the home team some breathing room with under four-and-a-half left to play. Community made two free throws to cut it back to a four point game, 37-33, before Rose’s short jump shot made it a six-point game again. That basket would be Ridgecroft’s last one from the floor, coming with 1:47 remaining.

Forced to foul, CCS began a parade of Rams to the free throw line, but Ridgecroft made the back end of their one-and-ones and soon had an eight-point lead, 41-33. At the 1:03 mark King sank a pair for the Rams’ largest lead of the night, 43-34. The Cyclones threw a scare into the home crowd, making a couple of foul shots and a short jumper to cut it back to a five-point game, but King made two more for the Rams and the cushion grew back to seven with 38 seconds left. The Rams closed it out making three-of-six – all by King – and Ridgecroft (14-7) advanced on to the next round to face Halifax Academy after scoring the seven-point victory.

“In the second half we had a good transition game, and we made some clutch shots and free throws,” added Oliver.

The playoff game with the Vikings in Roanoke Rapids will be on Thursday and mark the second time the two teams have met. Earlier, Halifax took a 50-21 home court win during the regular season back on Dec. 6.