AHOSKIE – Ridgecroft School just barely missed out on their third straight Tarheel Independent Conference regular season crown in girl’s basketball. They were also carrying a six-game win streak into the conference tournament, which they were also hosting this year in their own gym. They were also facing The Albemarle School in the first round, a team they’d beaten twice this year already, both times by 40 points.

I guess you know what’s coming next.

The Lady Rams rode a career night performance from sophomore guard Brooke Rose – who finished the evening with 28 points, with 20 more from Reagan King as they advanced to the second round of the tournament with a 74-19 win. 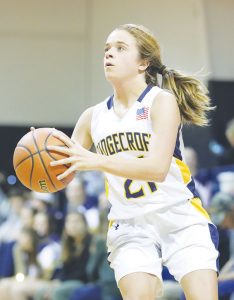 The Lady Colts actually led in this game when Lindsay Winslow nailed a long-range three-point shot for a 3-2 Albemarle lead. Taylor Stallings then got a lay-up off a defensive rebound and it was a 5-2 lead.

Rose then made one-of-two free throws followed by a short jump shot that tied the score at 5-all. It then became the ‘Reagan King Show’ as the junior sharpshooter scored from everywhere, mostly with lay-ups, and pumped in a dozen Ram points in a row. Only another triple from Winslow broke her streak, as she got the next two points for a 14-point first quarter scoring outburst. The closest Albemarle came the rest of the period was 10 points at 19-9 before Ridgecroft closed it out leading 25-10.

The Rams topped their 14-point run from the earlier period by scoring 17 straight in the second quarter; and holding the Colts scoreless. They took it from 31-15 to 48-15 by halftime. Again, King did most of the damage, this time scoring seven points during that run.

Rose opened the second half with a three-pointer followed by a lay-up by Albemarle’s Brooke Perry. It would be the last points for the Colts for the quarter as Ridgecroft matched their last run with another 17 in a row. Rose tallied her final nine points of the game during that frame, helping carry her team to a 68-17 lead entering the fourth quarter.

Under the 40-point sportsmanship rule, the game-clock ran the entire time in the final eight minutes. Albemarle got a basket – giving them nine points for the final three quarters of the game. Coach Susan Oliver emptied her bench and all eight Ram players scored before they claimed the early 55-point win, sending Ridgecroft to a seventh straight win and a semi-final against the Lawrence-Terra Ceia winner on Friday.

AHOSKIE – The Ahoskie Christian girl’s basketball team sent their seniors out in style with a huge upset win, 33-27,... read more