Birdsong wasn’t the only Rams player to hit for a dozen, teammate Dawson Rose also executed a 12-point effort in the win.

The Rams played their sixth straight game without guard Drew Davis, still out nursing an injury, but they still had enough to overcome a still-developing Warriors squad which still has yet to win this season.

Rose and teammate Wyatt Liverman combined to score the first six Ridgecroft points of the game before Birdsong unleashed one of his long-range bombs from behind the three-point line for a 9-0 Rams lead. Jason Guo was fouled on a drive to the hoop and made one-of-two free throws to break the string. Liverman added another lay-up for an 11-1 Rams lead after the first period. 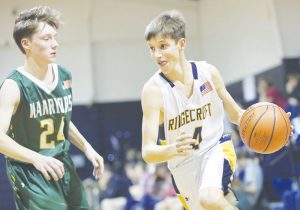 Guo and teammate Benson Zheng opened with the first field goals for the Warriors as the second quarter began, pulling LAW within six at 11-5. It was 13-5 when Tyler Wheeler got a circus shot to fall and the Warrior deficit was back to six again. But Lawrence couldn’t get anything else to work the rest of the half. Birdsong ripped three of his triples while Rose got two more lay-ups and the Rams stretched their lead to a comfortable 19-point margin, 26-7, by halftime.

The two squads played almost even-steven in the third quarter, the Rams coming out on top by a point thanks to a three-pointer from Grayson Joyner, his only points of the half. It was now a 21-point Ridgecroft advantage, 37-16, as the game entered its final eight minutes.

Rams coach Kris Kahn cleared the bench in the fourth quarter to get everyone in white-and-blue some quality playing time. Meanwhile, Lawrence was still scrappy, despite being down by 20 or more. After Zeb Askew scored for Ridgecroft with two minutes remaining, Lawrence didn’t allow the Rams to score again and closed out the game on a 7-0 run led by Riley Ratzlaff. The effort not only got the final score below 20, but showed some Warrior pride heading into the final week of the regular season.

The Rams played at Hobgood last night (Wed.) in a game not completed by press-time. The regularly-scheduled non-conference contest with Halifax won’t be made up. The Rams will celebrate Senior Night on Friday at home against The Albemarle School. Lawrence visits Hobgood tonight (Thu.) and league-leader Terra Ceia tomorrow before returning home Monday to host Pungo.

AHOSKIE – Ridgecroft School fought off a furious Lawrence Academy comeback here Tuesday night and held on to down the... read more