AHOSKIE – Ridgecroft School fought off a furious Lawrence Academy comeback here Tuesday night and held on to down the Lady Warriors 33-27 in Tarheel Independent Conference play.

A LAW win would’ve moved the Warriors within a game of front-running Pungo Christian in the latest TIC girls standings; however, the Lady Rams’ win moved them into a tie with Northeast for third place, and Ridgecroft owns the tie-breaker having won three of four from the Eagles this season.

Ahead by two points with less than a minute remaining, Ridgecroft made four straight free throws to ice the game. 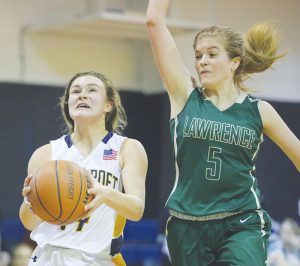 “We played hard,” said Ridgecroft coach Susan Oliver. “We adjusted during the game and we made our free throws at the end. This was a big conference win for us.”

Both teams came out tight in this one having just played a Monday game. Twice the game was tied and remained that way until Emma Wood Boone’s put back gave the Rams a 6-4 lead after the first quarter.

Gracen Rogers tied it a third time at 6-6 out of the gate the start the second quarter, but a Reagan King lay-up off a turnover and a Brooke Rose three-pointer gave the Rams some breathing room just a minute into the period. Rogers came back to nail a trey for the Warriors and when Lauren Smith got a lay-up the game was knotted a fourth time, 11-all. Just before the horn, Rose broke the tie with a jump shot and Ridgecroft headed to the locker room up by a pair, 13-11.

Early in the second half Lindsey Smith made a free throw for Lawrence and the Warriors had crept within a point at 15-14. But another Rose jumper and a pair of foul shots by Olivia Daly pushed the Rams back out to a five point lead 19-14. LAW continued to attack the rim, but only made three of six foul shots and were still down by two after three, 19-17.

King and Rose helped lead a charge opening the fourth quarter as Ridgecroft scored seven straight and bulged their lead out to nine, 26-17 in the first 3:15 of the period. But Lawrence went on a 7-0 run of their own thanks to Lauren Baker and soon were back within a pair, 26-24. After another Daly field goal and a free throw by each team, Smith drained the final shot from the floor on a put back. With 51 seconds remaining, Lawrence was forced to foul and the Rams kept their cool at the line, hitting four of six from the charity stripe to preserve their six-point victory.

Ridgecroft cancelled their game with Halifax last night (Wed.) and instead played at Hobgood in a game not completed by press-time. The Rams will celebrate Senior Night on Friday at home against The Albemarle School. Lawrence visits Hobgood tonight (Thu.) and Terra Ceia tomorrow before returning home Monday to host league-leader Pungo.