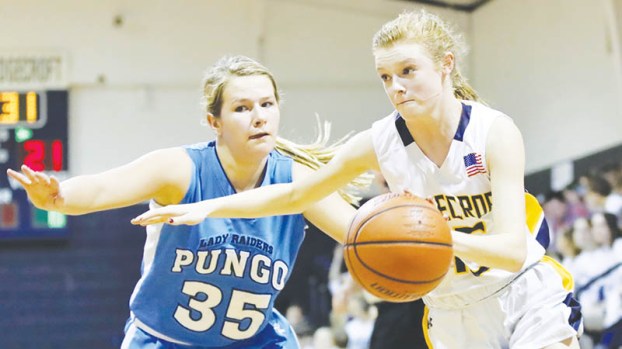 AHOSKIE – In all her years of coaching in Ridgecroft School’s gym, Pungo Christian girls basketball coach Melanie Sawyer had not won on that unfriendly floor until this season in the Nick Brantley Tournament.

Friday night, Sawyer’s Lady Raiders pulled off an upset in posting their 12th straight win of the season with a 36-35 upset of the Lady Rams, tightening their hold on first place in the Tarheel Independent Conference with a 5-0 mark. It was their first game since Dec. 19 at Terra Ceia.

“Be sure you say two ‘lucky’ wins,” Sawyer emphasized after the game. “They (Ridgecroft) gave us everything they could throw at us.”

In a game that featured seven ties and seven lead changes, the final moments came down to free throws, and unfortunately for Ridgecroft, they were just 2-of-10 in the fourth quarter.

“They gave a lot of effort,” said Rams coach Susan Oliver. “I’m very proud of them for that.”

Reagan King got Ridgecroft’s first points of the contest, but by the end of the first quarter she was saddled on the bench in foul trouble. The game seemed to swing back-and-forth in the early going with neither team able to find a rhythm; it ended in a tie after the first eight minutes, 13-all.

After the game was tied 16-16 early in the second period, the Raiders were able to swing the momentum their way both inside and on the perimeter as Pungo went on a 9-2 run, building a 25-18 lead by halftime.

In the second half, Oliver changed her defense and it worked. Pungo was able to get just a free throw and a lay-up as the Rams clawed their way back into the contest with Sydney Lane and Brooke Rose leading the comeback. After Skylar Brown made a pair of free throws near the end of the quarter, the Rams had fought back to within a point, 28-27, headed into the fourth.

Ridgecroft tied it early in the final frame thanks to a free throw by Emma Lane, and then took the lead on a short jump shot by Rose. Pungo answered to tie it at 30-30 before Rose again came through, giving the Rams a two-point lead, 32-30. The Raiders again tied the contest, and as Ridgecroft attacked the basket, they held a lot of their own fate in parading to the free throw line. But the shots at the charity stripe just would not sink and King, who had returned in the third, despite picking up her fourth foul, then tried to rally her team with a lay-up that tied it at 35-35.

Just when it looked like the game would come down to the final possession, the Rams fouled after a missed shot and Pungo’s Lauren Kelly Ricks made one-of-two foul shots with seven seconds left that proved to be the margin of the win.

Ridgecroft (8-5, 4-2, TIC) steps out of conference on the road at Faith Christian in Rocky Mount tonight (Tues.) before a make-up game at Hobgood on Thursday.