GREENVILLE – At the NC Independent Schools state softball championship series played here at The Oakwood School, Ridgecroft School and Halifax Academy played a tight game, but Halifax pulled out the 11-4 victory in the first game on Friday.

Ridgecroft got on the board first when Grace Vaughan’s base hit scored Ruthie Daniels for a 1-0 Rams lead. A Reagan King triple and Shelby Hoggard groundout provided the other RBI’s for Ridgecroft in scoring their first three runs.

The game was tied at 3-3 with Halifax batting in the bottom of the fifth when Drew Rose singled off of Mandy Spence, driving in the go-ahead run, and the Vikings never looked back from there, scoring four runs in the inning and four more in the sixth. 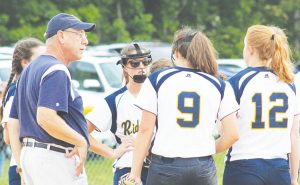 Ridgecroft School softball coach Jon Northcott (blue T-shirt) talks to his team during a time-out. The Lady Rams made it to the NCISAA softball Final-Four in Greenville May 19, but lost to Halifax Academy and The Oakwood School. | Staff photo by Gene Motley

The Rams’ final run came in the top of the seventh when King singled and later scored on a Kathryn Outlaw base-hit.

Vaughan, Outlaw,  King, and Hoggard each drove in a run to lead Ridgecroft. Defensively, the Rams didn’t commit a single error in the field as Hoggard had the most chances with seven.

The loss sent the Rams into the loser’s bracket where they faced a must-win situation against Oakwood, with the Eagles playing on their home field.

Mandy Spence started for Ridgecroft and gave up her first run on a passed ball in the bottom of the first inning, leaving the Rams trailing 1-0.

More trouble followed as Ridgecroft surrendered six more runs in the bottom of the second inning, leaving the Rams in an early 7-0 hole.

The girls in blue broke through in the top of the third when Spence and King walked and later scored on Daniels’ base-hit to right field. The Eagles were held off the board in their half of the inning, so after three complete, the Rams trailed 7-2.

Oakwood got its final three runs in the bottom of the fourth inning, leaving the Rams eight runs down at 10-2.

In the fifth, Ridgecroft plated two more runs when King and Lane smacked back-to-back base hits and scored on a double by Outlaw.

That completed the scoring – and the season – for Ridgecroft as they fell 10-4.

King, Lane, Outlaw, and Daniels had the only hits for the Rams. Spence was tagged with the loss after giving up ten runs on nine hits.

“It was a great season that we wish could’ve had a better ending,” said Coach Jon Northcott. “I don’t think many people thought we would make it to the Final Four.”