AHOSKIE – For the first time in three seasons Ridgecroft School is back in the state softball Final Four.

Ridgecroft banged out 14 hits after they grabbed an early lead.  Ruthie Daniels got the win in the circle with relief help from Mandy Spence.

“We hit the ball against this team (Pungo) as we have against any all year,” said Rams coach Jon Northcott. “Mandy came in and shut them down and we ran the bases really well.” 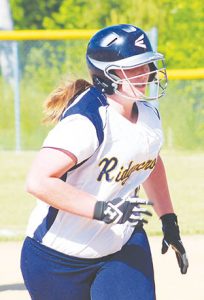 Ridgecroft School’s Mackenzie Brown heads for home in the Rams’ 15-1 home win over Pungo Christian in the NCISAA softball playoffs. Brown was 2-for-3 at the plate in the win. | Staff Photo by Gene Motley

Ridgecroft put their first two runs on the board in the bottom of the first inning. Reagan King and Sydney Lane opened with base hits before Kathryn Outlaw’s deep ball to center scored King.  After Lane was forced at third base, Mackenzie Brown reached on an error allowing Outlaw to score and the Lady Rams lead it 2-0.

Pungo cut the deficit in half with a run in the top of the second inning, but the Rams tacked on three more in their half of the frame. King doubled in one run, Mandy Spence scored on a steal of home, and the last run of the inning came on an Outlaw RBI groundout.  It was 5-1, Rams.

In the bottom of the fourth, Ridgecroft sent 13 batters to the plate and 10 of them scored. The big inning came thanks to a error, a single by Outlaw, another single by Ruthie Daniels, a double by Mackenzie Brown, a single by Grace Vaughan, and a triple by King, before the final run came in via the inning’s second error.

Spence gave up a lead-off walk, but then sat down the others in order to seal the win.

King led the way going 3-for-4. Outlaw, Brown, and Daniels each collected two hits for the Rams, while Lane, Vaughan, Shelby Hoggard, and Tracy Hughes had the other hits.

Ashley Spencer went 2-for-2 at the plate to lead Pungo, while Caroline Fletcher took the loss with relief help from Macy Morgan.

“The team kept talking about what time they’d play on Friday,” joked Northcott. “I told them we had to take care of Tuesday first.”

Friday the Rams will meet top-seed Halifax Academy at 10 a.m. followed by #2-seed Lawrence against the host team, Oakwood.  The first-game losers will then play at 2 p.m. with the winners meeting afterward.    The state championship game will be Saturday at 12 noon.