AHOSKIE – Ridgecroft School exploded for five runs in the first inning and went on to beat Bethel Assembly 11-3 here Tuesday afternoon in a non-conference softball game for both teams.

“This was a good non-conference win for us,” said Ridgecroft coach Jon Northcott. “We played solid defense, Ruthie pitched another good game and we were very aggressive on the base paths keeping up the pressure on their defense.”

The Lady Rams opened the scoring with five runs in the bottom of the first inning. Reagan King walked, stole second, and scored on a Sydney Lane RBI double. Lane would then score on a Kathryn Outlaw RBI triple and Outlaw would turn around and score on a three-bagger by Shelby Hoggard. Skyler Brown followed with a base hit that brought in Hoggard. After Tracy Hughes laid down a bunt and beat it out for a single, Brown scored on a Mandy Spence RBI single to centerfield and Ridgecroft had tacked five runs on the board after just one inning of softball.

Bethel was not intimidated. The Lady Eagles responded with a pair of runs of their own in the top of the second. Kayley Minton and Sarah Conner laid down back-to-back drag bunts and beat them out for singles. Minton then scored on an error and Conner would score later on another Rams miscue. Despite the two errors, Ridgecroft still led 5-2 after two. 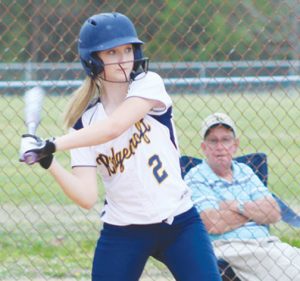 Ridgecroft School’s Sydney Lane went 3-for-3 and drove in three runs Tuesday as the Lady Rams bounced back from a Monday loss and topped Bethel Assembly 11-3. | Staff Photo / Gene Motley

Four more Rams runs came in the bottom of the third inning. Brown reached on an error, Hughes singled and Grace Vaughan walked to load the bases. King then delivered an RBI with an infield single. Lane followed with an RBI single of her own just before Outlaw ripped a two run double into the gap in left centerfield. When the dust settled, Ridgecroft had built a 9-2 lead after three innings.

Bethel scored one run in the top of the fifth. Jenna Dunlow tripled to right field and then scored on an error for a 9-3 Ridgecroft advantage.

Ridgecroft scored a run in the bottom of the fifth when King singled, stole second, and scored on a Lane RBI single to up the lead to 10-3 after five.

The Rams got one final run in the bottom of the sixth inning on a Brooke Rose RBI single for the eight-run final margin of victory.

Ridgecroft banged out 16 hits, led by Lane and Outlaw who both had three hits and drove in three runs each. King, Brown, and Hughes had two hits, while Spence, Daniels, Hoggard, and Rose had one hit apiece. Bethel had seven hits: single safeties by Dunlow, Conner, Minton, Lindsey Todd, Eliane Bazemore, Makayla Ball, and Maddie Knowles.

Daniels pitched a complete game for the win, bouncing back from her losing effort a day earlier to Lawrence Academy. She allowed three runs on seven hits and had two strikeouts. Todd pitched five innings for Bethel and got tagged with the loss, while Haven Hoggard pitched one Eagles inning in relief.

Ridgecroft raised their record to 4-2 with the win and are back in Tarheel Independent Conference action later today (Thursday) against Terra Ceia Christian School. Bethel evened their record at 3-3 and host Albemarle Tuesday at home.

AHOSKIE – Lawrence Academy scored in every inning and used an early lead to down rival Ridgecroft School 13-1 here... read more