Ruthie Daniels picked up the win allowing six runs on seven hits with one walk and five strike outs.

Albemarle pitchers combined to give up 15 runs on 10 hits while walking six and striking out nine.

Shelby Hoggard led the Lady Rams, going 3-for-4 and scoring three runs, driving in four more with a triple and a home run. Mackenzie Brown also had a multi-hit game at 3-for-4 with two RBI. Reagan King also drove in a pair of runs. 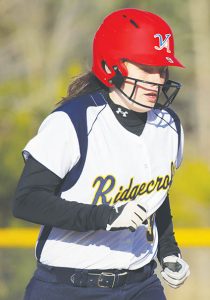 “It had been 10 days since our first – and last – game and I wasn’t sure how we’d play,” said Rams coach Jon Northcott. “I thought we continued to hit the ball well again with 10 hits and Ruthie pitched another good game. Our highlight of the game was definitely Shelby Hoggard’s two run home run because I knew that it was just a matter of time before Shelby hit one out.

Albemarle struck first in the top of the first inning when Taylor Stallings scored on a groundout by Lindsay Winslow to make it 1-0 after a half-inning.

Ridgecroft answered in their half of the frame when Sydney Lane and Kathryn Outlaw both scored on a single to center by Hoggard. Hoggard would score when Mackenzie Brown reached on an error to make it 3-1, Rams.

The home team then plated six runs in the bottom of the second. With the bases loaded, Mandy Spence, pinch-running for Kaylie Simmons, scored on a single by Outlaw. King and Lane scored on an error on the same play. Hoggard then hit her two-run home run, scoring Outlaw. Later, Daniels scored after Spence had reached on an error to make it 9-1, Ridgecroft.

Albemarle tried to get back into it with three more runs in the top of the fifth before the game was called.

“The schedule gets tougher though as we play at Oakwood on Friday and then at Pungo on Monday,” said Northcott.