PANTEGO – When you face an opponent five times, no matter how you mix the pieces, someone comes out with an edge.

Ridgecroft used that edge to their advantage and powered their way to the Tarheel Independent Conference’s varsity girls tournament championship with a 65-30 win over Lawrence Academy. 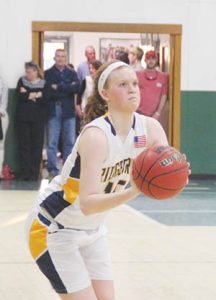 Ridgecroft School and Lawrence Academy went into their fifth meeting Saturday afternoon here plenty familiar with each other.  Those earlier meetings included the Eric Baggett Tournament championship, the Lt. Nick Brantley Tournament championship, and two meetings in the conference regular season.  The Lady Warriors won just one of that quartet of contests, but it ended Ridgecroft’s 16-game conference win streak last month in Merry Hill.

Familiarity may breed contempt, but it can also breed indifference.  But the Lady Rams were not about to let that happen; and especially not in a game with so much at stake.

While Rams’ seniors Ruthie Daniels and McKenzie Brown helped lead the way, it was sophomore and tournament MVP Reagan King with her 18 points that helped dominate LAW.

Lawrence’s players saw plenty of the back of the Lady Rams’ jerseys, chasing Ridgecroft up and down the (host school) Terra Ceia Christian School floor.  Brooke Rose got a lay-up followed by Brown making one-of-two foul shots for a 3-0 Rams lead.

Lawrence answered with a three-point basket from Lauren Baker that knotted the score at 3-all.  It was as close as the Warriors would come the rest of the afternoon.

The Rams reeled off eight straight points, four of which were easy lay-ups off turnovers that Brown quickly converted.  Sydney Wilkerson, the lone Lawrence senior, then got a put back in the lane that made the score 11-5, but that was all Lawrence would score in the period.  Ridgecroft rattled off nine more points and were ahead 20-5 after the first quarter.

The Rams opened with a 14-point run thanks to King and Brown doing all the scoring, and it was 34-5, Ridgecroft with three minutes left before halftime.  Hailey Gardner, who Coach Lee Hoffman brought up from his junior varsity squad,  then made a lay-up for the Warriors to stem the tide, but Lawrence trailed 34-7. Daniels, Rose, and King then scored the final three field goals of the half and Ridgecroft went into the mid-break ahead 40-7.  The Rams had efficiently scored 20 points in each of the first two quarters. 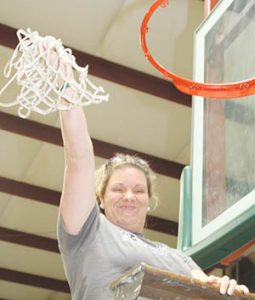 Lawrence found some offensive rhythm opening the second half, scoring seven of the first nine points of the third quarter, which made it 44-15.   With the Warrior defense doing a great job of protecting the middle, Ridgecroft went to their perimeter game, firing away with jump shots.  Rose fired in a couple, as did Sydney Lane.  But almost half the Ram points were off the nimble hands of Daniels, who scored nine of her team’s 20 points (third straight quarter Ridgecroft had scored 20), including a pair of free throws and a three-point basket before the buzzer sounded and the Rams ahead 60-20.

The score automatically kicked in the 40-point sportsmanship rule which led to a running clock for much of the fourth quarter.  Baker, who’d been quiet the past two quarters finally drained a couple of lay-ups, but after another trey from Daniels and a jump shot in the paint from Emma Wood Boone, this one went into the books as a 35-point title game win for Ridgecroft.

“I’ve got a good group of girls,” Oliver added. “Tonight everything connected and they were just ready to go.”

Lawrence played without the services of junior center Brinson Edmundson, who suffered a broken leg in the Warriors’ final home game with Pungo.  Edmundson did delight the crowd by making the first basket in warm-ups from her wheelchair.

“We settled down, but it came too late,” said Hoffman. “Still, I’m proud of our effort.  They (Ridgecroft) have a good team.”

Lawrence (12-9; 8-2, TIC) also finished runner-up in the regular season.  It earned the Lady Warriors an 11-seed in the upcoming NC Independent Schools Athletic Association state tournament where they will host Pope John Paul of Greenville tonight in Merry Hill.  Ridgecroft (18-4; 9-1, TIC) is an eight-seed and received a first-round bye. The Rams will have a home game in Ahoskie Thursday night against the Pungo-Oakwood winner.