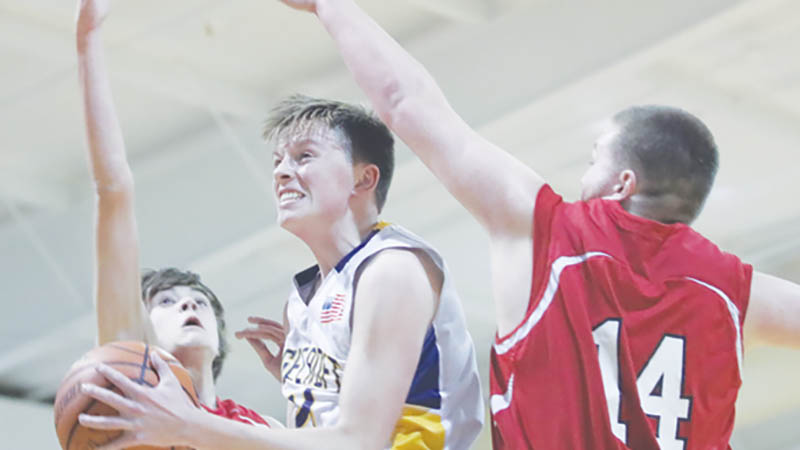 Blake Birdsong finished with 27 points – including five three-pointers – to lead the Rams in the win.  Jasper Krueger’s 16 points accounted for the only other Rams player in double figures.  Ryan Rowe led Northeast with 18.

After Dylan Edwards dropped a triple for NEA to open the game, the Rams’ Birdsong got the night’s first tie when he responded with a trey of his own.  It was Edwards again later tying it again at 5-5, and then helping the Eagles to a 10-7 lead.  Birdsong came through again with another triple that gave the fans their third tie of the night, then another short jumper for a 12-10 Rams lead.  Rowe answered at the NEA end and the game was tied for a fourth time at 12 apiece. But Birdsong scored four of his team’s final six points and helped the home team to an 18-14 lead after one.

It was 19-16, Rams, early in the second when Rowe tied it for the fifth and final time, 19-all.   From there, Ridgecroft went on a 12-0 run and seemed to suck the life out of the Eagles.  When Rowe made one-of-two free throws to break the string, it was 31-20, Rams.  After another Northeast bucket, Dawson rose ended the first-half scoring with a trey that carried Ridgecroft to a 34-22 halftime lead.

Northeast refused to yield, cutting it back to a four-point game on a Rowe three-pointer, 51-47.  But this time Krueger scored six in a row, interrupted by a Drew Davis triple, down the stretch that led to the 11-point win.