AHOSKIE – Ridgecroft School scored the first six points of the game and kept their foot on the accelerator the rest of the night as they swarmed all over TIC rival Northeast Academy and captured a 47-8 win.

All nine players scored for Ridgecroft as the clock ran continuous for all of the fourth quarter as a show of sportsmanship.

Ruthie Daniels, surprisingly, was the only player in double-figures for the Lady Rams, despite the high score; she finished the night with 23 – all but two of those points coming from behind the three-point line.  Haven Jilcott and sister, Haven, finished with four each for Northeast – the only points for the Lady Eagles that Ridgecroft allowed. 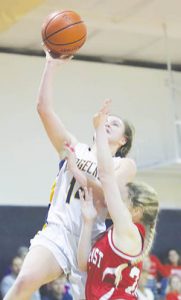 Mackenzie Brown got two quick put backs and Sydney Lane scored on a fast break for a quick 6-0 Ridgecroft lead. Haven Jillcott’s jumper underneath got NEA on the board, but Daniels scored her team’s last four points and Ridgecroft sat on top after one quarter, 11-2.

Daniels continued her three-point barrage in the second quarter, while Brooke Rose and Reagan King accumulated their only points of the game.  The Jilcott sisters scored one basket each, but Lane’s field goal with time expiring in the half helped the Rams to a 23-6 halftime edge.

Opening the third quarter, Brown got a put back, Lane sank two foul shots, and Daniels drained four more trey as the Rams built the lead up to 33-6.  Haley Jilcott’s basket midway through the period was Northeast’s last score of the night and it was 43-8 after the third.

Emma Lane and Emma Wood Boone closed out Ridgecroft’s scoring on the night with their field goals in the fourth as the Rams ran their record to 8-1 and stayed on the heels of unbeaten Lawrence in the Tarheel Independent Conference.

Northeast has a non-conference game with Community Christian tonight (Thursday), before a TIC home date with Terra Ceia on Friday.