AHOSKIE – He never really hung up his whistle, or left the bench.

If you’ve attended any Ridgecroft School athletic events the past seven years, the booming baritone voice of athletic director Doug Cobbs shouting encouragement from off the playing floor is unmistakable.

Now, after 30 years of guiding the Rams’ athletic fortunes, both as a coach and an administrator, Cobbs is retiring. 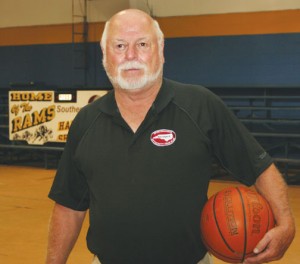 Ridgecroft School athletic director Doug Cobbs poses for one of the last times in the Ridgecroft gym. He coached the basketball teams – boys and girls varsity and girls j.v. – until stepping down in 2008, but remained at the school as its AD. Staff Photo by Gene Motley

Earlier, during the Lt. Nick Brantley Scholarship Basketball Tournament in December, Cobbs was presented with an appreciation plaque to honor his service as Tournament Director.

“30 years is a long time to be anywhere,” Cobbs said, reflecting in his office located behind the Ridgecroft gym. “Fortunately, I’ve had the support here of faculty, students, and staff, so I feel good about stepping away and letting somebody else have a chance, but I will miss it, you can be assured of that.”

That new ‘somebody’ will be Joe Maione, a Kentucky product who will assume the athletic director’s duties later this summer.

In the meantime, Cobbs will be the second Ridgecroft mainstay to leave the school in the last two years, joining longtime Headmaster and fellow-coach, Elton Winslow.

“Elton and I kind of took the basketball one year and ran with it,” Cobbs recalls. “He did some of the stuff with the varsity boy’s basketball.  It’s been a revolving door sometimes, but hopefully we’re the steppingstones to bigger and better jobs, but that’s really what it’s all about: teaching.”

Though he’s relinquishing the reins of athletic administration, Cobbs will still be a physical education teacher at the school; and despite his success on the playing floor, teaching also remains one of his passions. Nonetheless, he recounts with pleasure his coaching accomplishments.

“Of course, winning the state softball championship in ’93 was a big moment,” he relates with a grin. “Finishing runner-up with the girls in the state basketball tournament (in 2008), that was a big (one).”

Cobbs says so many of his players – and students in the classroom – exceeded his expectations, and he was glad to have been just a small contributing part of that.

“I guess what I’m going to miss the most about this job is the kids,” Cobbs says. “I love being around the kids, teaching them, and I hope I’ve helped some of them in their present endeavors, but I will miss the children more than anything. They’re the most important thing out here.”

Cobbs refuses to single out one of the hundreds of athletes he’s mentored.  He humbly keeps in perspective that he made a difference in their lives.

“It would be very difficult for me to actually pick one who stood out more than any of them,” he acknowledged. “I couldn’t do it; they’re all special to me and it would be hard just to pick one of them out.”

A native of Richmond and VCU grad, Cobbs first came to Ahoskie from Frederick Military Academy in Portsmouth, VA when it closed in 1985.  He had been football coach at the school and was coming to a soccer institution.

“I found out on April first of 1985 (the school) was closing, so I made a trip down here, interviewed for the job, and fortunately for me I got it,” he stated.

Cobbs says early success did not come overnight, but once he and his players began to blend, the wins began to happen.

For his first seven years Cobbs says he coached boy’s varsity basketball, before shifting to varsity girls and then added the responsibility of junior varsity girls.  He held parts of all three posts until 1993 when current coach Susan Oliver took over the girls program.  Then there was the expansion of sports.

“Since I’ve been here we’ve added j.v. and varsity volleyball, girls soccer, a j.v. and varsity shooting team, golf, j.v. softball and baseball, and all our middle school sports,” Cobbs counts off. “Scheduling and transportation was once an easy thing and now we’ve expanded so much that those are now two of our biggest problems.”

“We used to play three games every sport against each team,” he recounts, “and that was no fun at all.”

While coaching football is in his blood, Cobbs thinks Ridgecroft’s proficiency and success in soccer has held off bringing it to the school.

“Cost, lights, and everything and soccer is so entrenched in this school,” he said. “If enrollment improves you never know, you cannot ever say ‘no’.  There’re a lot of people out there that would like to see football, but there’s a group out there that doesn’t want it to take away from the soccer program as well because even though we didn’t have a great year this year we’re still one of the best soccer schools in the state.”

Cobbs won’t say what motivated him to begin to see farther down the road; but he admits, with time, things became a bit clearer.

Cobbs hopes to teach one, maybe two, more years before he’ll step away from the education arena for good; but he won’t say when for sure.

“That’s up to Ridgecroft,” he adds with a laugh. “With a lot of years you just want what’s best for whoever comes behind you and make sure that they get the support that I’ve had.”

Cobbs holds nothing more sacred than family. Married to his wife, Nancy, for 28 years, he has two adult children, a stepson, and grandchildren.

“Naturally, we don’t get to spend as much time as we’d like, but we see each other as much as we can,” he says. “I have a real close family and nothing’s more important as far as I’m concerned. Family comes first; they’re my number-one priority.”

He also very much considers Ridgecroft an extension of family.

“This place is part of my family,” he declares. “That’s why the kids are what it’s all about.”

He pauses as the emotion rises within him.