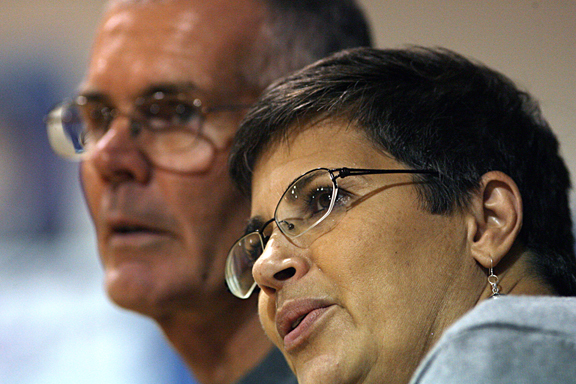 AHOSKIE – The sixth annual Lt. Nick Brantley Scholarship Tournament is in the books.

“It was, as always, an exciting event,” said Thadd White, Sports Editor of the Roanoke-Chowan News-Herald and one of the tournament’s founders. “Each year we seem to have a better crowd, a more enthusiastic group of fans and a wonderful time of good basketball and great fellowship.”

“It was a wonderful time again this year,” he said. “I think the highlight for me is always the closing ceremonies. We get to celebrate the successes of the week and it’s a special time for all of us.”

The first game of the night was the junior varsity girl’s championship which saw Ridgecroft School defend its title. The Lady Rams edged Pungo Christian by a final of 33-28.

The jayvee boys’ title game featured the same two schools, but a different outcome as Pungo Christian claimed its first championship in the event with a 29-13 win over Ridgecroft.

The next championship game featured the varsity girls of Ridgecroft and Bethel Christian. The Lady Eagles claimed their first championship in the tournament with a 40-33 win over Ridgecroft.

In the varsity boy’s championship game, Ridgecroft School kept Lawrence Academy from winning their third straight title with a 53-26 victory. The win allowed Rams’ coach Chris Hill to become the first person to win the championship as both a player (2006) and a coach.

At the end of the tournament, a host of awards were handed out to student-athletes. Keith and Joyce Brantley, Nick’s parents, were on hand to present the awards along with Murray and White.

Awards for the jayvee tournament included trophies for first and second place.

The Most Valuable Player of the varsity girl’s tournament was Bethel Christian Academy’s Kelsie Conner. She was joined on the All-Tournament Team by teammates Elizabeth Farmer and Jessica Howerton. Also earning a spot on the team were Ridgecroft’s Miller Bryant and Hennie Larabee along with Ashton Liverman of Northeast Academy.

In addition to those awards, the Spirit of the Tournament Award went to the Lady Eagles of Northeast Academy. The varsity girl’s team was chosen as the one which best represents why the tournament is played including good sportsmanship and great effort.

Friday night, Chase Stevens of Lawrence Academy was chosen as the top award winner. The other two scholarship winners were Daniel Feher of Bethel Christian Academy and Brad Johnson of Northeast Academy.

The scholarship winners are chosen from 10 finalists chosen by the five schools.

“All five schools did an outstanding job in their nominations,” Murray said. “The 10 young people we interviewed were among the best we have ever considered for the scholarships.”

“It was one of the most difficult years we have had in choosing the winners,” he said. “All 10 were deserving young men and women.”

Plans are already underway for the seventh annual event. Anyone wishing to donate to the scholarship can send it to the Lt. Nick Brantley Scholarship, c/o Ridgecroft School  P.O. Box 1008, Ahoskie, NC 27910.