It was Bethel’s first loss in their last three games and left the Eagles at 0-1 in conference. Trinity, from Greenville, has now won three in a row after opening with a league win.

Bethel started hot, getting 16 points in the first quarter thanks to defense and strong defensive rebounding. In the second stanza, it was the Tigers’ turn to defense closely and Trinity outscored the Eagles in that frame 11-5. Bethel took a two-point lead (22-20) into the locker room at halftime. 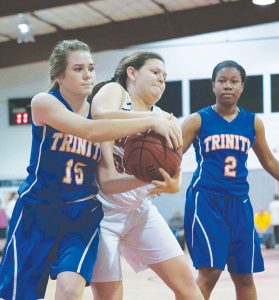 Bethel’s smothering defense continued and after the visitors claimed a lead midway through the third quarter they would not relinquish it for the rest of the game, pulling ahead 35-29 with eight minutes left in the game.

Bethel tried to comeback late, but their three-point shooting (3-of-22) didn’t materialize in the fourth. Despite 38 rebounds, 27 on the defensive end, Bethel could not catch up and suffered their first setback of the conference season with the eight-point loss.

Dunlow was leading scorer for the Eagles with 16 points while teammate Simmons added 15. Lucas Doughtie had six with four for Josh Bunch and two more from Paul Northcott to round out the Bethel scoring.

Meanwhile, the Bethel varsity girls are in first place in the conference after their 54-30 win over Trinity.

BACA started the game slowly but still managed to double-up the Tigers 8-4 at the end of the first quarter. The team’s run-and-gun kicked in the second quarter with Trinity still off balance. A 15-point second stanza had the Lady Eagles going into halftime with a 23-8 lead.

Trinity played much better in the third quarter, cutting their deficit to a dozen at 33-21 after the frame, but the Tigers’ energy could not last as Bethel pulled away late and claimed a 24-point win.

Kaylee Minton led the BACA scoring with 25 points while Lindsey Todd added 16, the only players in double-figures. Haley Northcott scored six, five for Sarah Conner, and two from Lauren Farless. 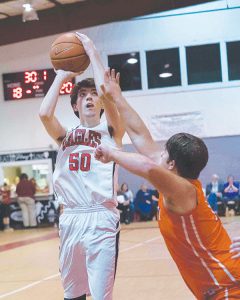 BACA’s Mason Dunlow fires over a defender for two of his game-high 16 points against Trinity, but the visiting Lions clawed the Eagles 51-43.

“Feels good to be in first place even if it is just one game,” said Bethel coach Ashley Byrum, who’s team last won a state championship in 2012. “I guess we’re climbing our way back to the top.”

Bethel’s boys and junior varsity squads will host Suffolk (VA) Christian on Friday (Dec. 8) in single non-conference games and both the Eagles girls and boys teams will travel to Ridgecroft School for a game on Tuesday, Dec. 12.