ASKEWVILLE – Despite winning half the boy’s varsity titles over a 10-year period, Bethel Assembly captured first back-to-back titles in winning the Eric Baggett Memorial Basketball Tournament as they romped over Northeast Academy 86-71.

“I’m very pleased and proud of this team,” said Eagles coach Ronald Cullipher. “It was a good win over Northeast for the championship, and a good way to start the season.”

The game was tied three times in the opening minutes of what would end up a high-scoring affair. Ryan Rowe got a put-back to break a 6-6 deadlock, and despite the two teams exchanging buckets the rest of the first quarter, Northeast maintained the lead, edging up by four after one quarter, 20-16. 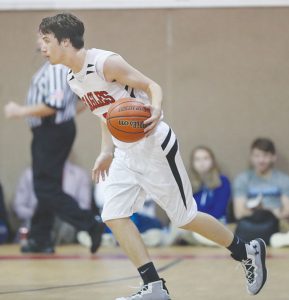 For the second time in three years Bethel Assembly Christian Academy has won their Eric Baggett Memorial Basketball Tournament in Askewville. Kyle Cullipher was leading scorer for the Eagles with 23 points in an 86-71 win over Northeast Academy in the title game. | William Anthony Photography

Still it went back-and-forth before Cullipher drained a three-pointer to tie it at 23-all. But Northeast re-took the lead and maintained it until Mason Dunlow was fouled for a three-point play, and when he swished a free throw, BACA led it 28-26. Brandon Ball then took a hard foul as Northeast picked up a technical foul.  Ball’s four free throws made it 32-26. From there the home team Eagles outscored the visiting Eagles, 9-6, for a nine point lead 41-32, at the break.

Jones opened the second half with back-to-back baskets and helped get Northeast within three at 41-38.  Later, Ball scored back-to-back to push it to a five-point lead, 47-42.  Every time Jones would help NEA inch closer, Bethel answered, never letting Northeast get closer than three points.  It was a six-point lead 62-56 at the end of the third quarter.

With both teams still shooting at a better than 50 percent clip, despite the physical play, it was a seven-point game, 71-64, before Northeast was forced to foul.  Bethel couldn’t convert several attempts, and when Luke Doughtie nailed a three-pointer, BACA increased its margin to a dozen, 76-64.  The host Eagles then converted five of their next nine from the charity stripe for what became a 15-point win in just their second game of the season.