AHOSKIE – The Albemarle School from Elizabeth City claimed their first boy’s championship as they were victorious 74-65 Saturday in the second annual Alex Parsain Memorial Basketball Tournament here this past weekend.

The tournament is named for former Ahoskie Christian School student Alex Parsain, who died tragically in an auto accident in 2017.  A junior at ACS at the time of his death, Alex was active in the school’s athletic program, having been a member of the basketball team.

The title game was close throughout with Bethel leading after the first quarter 15-11. But the Colts, who matched up well with the Eagles, went to an inside game against Bethel’s zone and that created plenty of fouling underneath. Albemarle was able to take a one-point lead at the mid-break, 31-30. The Colts then outscored them 43-35 in the second half to take the win. Logan Dunn had 40 for Albemarle while Mason Dunlow led three Eagles players in double-figures with 15. 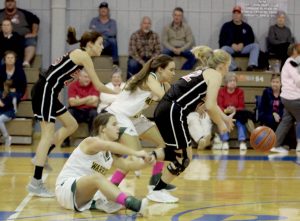 The girl’s championship also went to Bethel as they dethroned defending champion and host school Ahoskie Christian 45-38.   The Lady Warriors led for three quarters before the Lady Eagles, with their shuffling lineup, outscored them 18-5 in the final frame to pull out the win.

“I think we got tired,” said ACS coach Kelly Perry. “They had to work for their win and they also had a good bench with all the substituting.”

Lawrence Academy won both consolation games. The Warrior boys kayoed the host Warriors of Ahoskie Christian 65-36 in an offensive explosion where four LAW players scored in double-figures led by Brian Hughson with 17. Sawyer Mizelle had 16, 15 for Drew Pippens, and 12 for Riley Ratzlaff.

In the girl’s consolation game, Lawrence won on a buzzer-beater over fellow Tarheel Independent Conference member The Albemarle School, 37-36, despite committing 31 turnovers. Hailey Hope Gardner led the Lady Warriors with 14 points while Emma Cobb had 10. Perris Clayton had four points and 11 rebounds.

Friday’s games saw Bethel sweep Lawrence to advance to Saturday’s championship games. Eliana Bazemore poured in 14 points for BACA while Kayley Minton had 11 in the girl’s game, won by the Lady Eagles 51-21. Hughson was high scorer for the Warriors thanks to 11 points while both Ratzlaff and Mizelle had eight points each.

The evening games saw Albemarle’s boys ride a 20-point performance from Avery Krywanczyk in a 30-point first quarter as they blasted host Ahoskie Christian 63-24, winning by almost 40 points. Ahoskie Christian’s girls advanced to the championship round as they topped the Lady Colts 45-12.