RALEIGH – Emily Cooke has made the most of her freshman season playing softball at Meredith College. 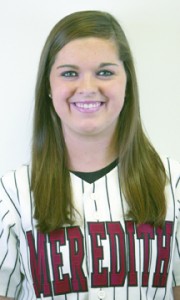 The Ridgecroft School alum was recently named to the All USA South Athletic Conference Second Team for her excellent play during rookie season with the Avenging Angels.

Cooke, who was named to the Best Defensive Player for the All-Roanoke-Chowan Softball Team in 2010, was named Tuesday as one of the top players in USA South.

She played center field for the Avenging Angels last season and had an excellent offensive and defensive season.

As a freshman, Cooke led the Meredith team in batting average, hitting an excellent .400 for the season. She also paced the squad in slugging percentage (.690) and hits (40). Cooke was the team’s top run-producer, scoring 26 times during the season.

In addition, Cooke was tops in doubles (nine), homeruns (six), triples (one) and total bases (69). She also topped the team in stolen bases, going a perfect 7-for-7 in steal attempts.

Cooke finished second on the team in Runs Batted In with 27.

As for her standings in USA South, Cooke was in the top six in four categories. She finished third in slugging percentage, fourth in homeruns and sixth in both batting average and total bases.

She managed to accomplish all those feats while missing five games with a hand injury.

AHOSKIE – The Ahoskie Recreation Department will offer a week of basketball clinics April 18-21. The camps will be open... read more