The Eagles knocked off Fairfax Baptist Temple Academy 69-56 to win the Victory Christian School tournament held here this past weekend. That victory, coupled with their win in the Eric Baggett Memorial Tournament, gives the Eagles two championships midway through the 2010-11 season. 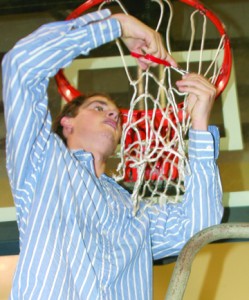 Tournament Most Valuable Player Shane Tripp led the Eagles with 37 points in the finale after going 14-of-19 shooting. He added 15 rebounds and four assists in the title game.

Kyle Freeman added 19 points for the Eagles and six boards. He also had five assists.

The teams were tied at 11 after one quarter and Fairfax took a 22-21 lead into the intermission, but the Eagles controlled the third quarter. Bethel scored 22 points while holding the Rebels to just eight as they surged ahead 43-29. Both teams scored 26 in the final quarter.

Marky Palmer and Daniel Feher paced the Bethel defensive efforts. Feher had 16 rebounds, 13 of which were on defense to go with four points while Palmer had 10 rebounds, eight of which came on the defensive end of the floor. He added five points and one block in the contest.

Kevin Johnson and Zack Bazemore rounded out the championship scoring with two points each.

Bethel advanced to the final by beating Bethel Christian of Kinston 73-46 in Friday night’s semifinal.

Tripp again was the scoring leader as he had 26 points in the victory along with 14 rebounds, two assists and two steals. Freeman secured 14 points and added six rebounds and three assists.

David Simmons was also in double digits for the Eagles with 10 points. He added four rebounds, two assists, a block and a steal.

Palmer added seven points and seven rebounds for the winning team while Feher has six points and 13 boards.

Trey Hoggard came off the bench to contribute six points and a block. Rounding out the scoring was Adam Fairless who had two points.

After the tournament, Tripp was chosen MVP while Freeman was named to the All-Tournament Team.

The Eagles will be back in action today (Thursday) when they play Living Waters Christian Academy at 5 p.m.

Sports are often depicted as being dramatic and serious at all times and of incredible consequence. Every once in awhile,... read more