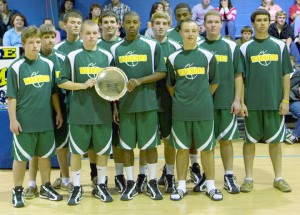 It seems tournament time is special to Lawrence Academy.

Last year, the Warriors won both the Lt. Nick Brantley Scholarship Tournament at the season’s beginning and the Tarheel Independent Conference tourney at the end of the campaign.

In 2010-11, the Warriors have already started by bagging one of those events again.

The first quarter was a battle as the teams went back-and-forth with four ties and five lead changes.

After an exchange of free throws, Palmer tied the game with his hoop, but Whitehead answered for Lawrence.

Tripp and Kyle Freeman scored the final two buckets of the first period as Bethel grabbed an 11-9 lead.

Feher added to the advantage with his score to open the second quarter, but Chase Stevens buried a triple and Trace Larabee added a free throw to tie the contest at 13-all.

Whitehead then gave the Warriors the lead, but it was short-lived as Tripp responded with a basket and a pair of free throws as he propelled the Eagles ahead 17-15.

Lawrence, however, controlled the remainder of the first half, getting a bucket from Darren Armstrong and a three-pointer from Trace Larabee to lead 20-17.

Stevens added his second hoop and Cade Larabee hit two free throws to send Lawrence into the locker room with a 24-17 edge.

Stevens opened the third quarter with a hoop that pushed Lawrence’s lead to nine (26-17), but Bethel scored the next seven points in a row to whittle it down to a pair. Tripp had a hoop and a three-pointer sandwiched around a Freeman bucket as the Eagles trimmed their deficit to 26-24.

A free throw by Cade Larabee pushed it back to three, but Tripp hit a shot followed by a couple of free throws from Feher as Bethel retook the lead at 28-27.

A pair of free throws by Bass pushed Lawrence ahead, but Bethel responded with a hoop from David Simmons to lead 30-29.

Lawrence, however, again closed the quarter well, getting five points from Cade Larabee as they surged to a 34-30 lead after three quarters.

The fourth quarter started well for Lawrence too as Bass and Whitehead hit four straight from the free throw line and Trace Larabee added a basket to give the Warriors a 40-30 lead with 6:20 to play.

Feher stopped the Lawrence run with his hoop, but the Warriors answered with four consecutive buckets, capped by a Whitehead dunk with 4:28 to play, and led 48-32.

Tripp scored for the Eagles to stop the spurt, but Trace Larabee answered with a pair of free throws.

Freeman then scored from behind the arc, but Larabee’s free throw and a score from Bass pushed the Warriors back in front by 14 (51-37).

Feher had six of the next seven points to close the gap to 11, but Bethel never got any closer as the Warriors closed out the game at the free throw line to preserve their second straight Lt. Nick Brantley Scholarship Tournament championship.