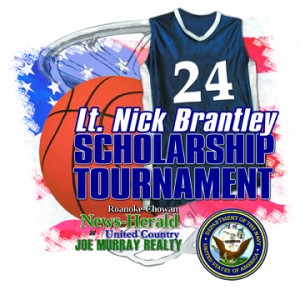 “It seems like just yesterday we were sitting in an office talking about the possibility of getting a tournament started for the local independent and Christian schools,” said co-sponsor Joe Murray of United Country Joe Murray Realty. “Now we are five years into what has become one of the bright spots in the prep basketball season. It’s exciting to have come this far.”

The tournament will feature four schools that have participated since the beginning – Bethel Christian Academy, Lawrence Academy, Northeast Academy and Ridgecroft School – and Pungo Christian Academy which joined three years ago.

In addition to five days of basketball, three scholarships are awarded in honor of the tournament’s namesake, Lt. Nick Brantley. Each year scholarships totaling $2,000 are given out during the closing ceremonies.

“We’ve been blessed to be a part of carrying on the rich legacy Nick left at Ridgecroft School during his playing days,” said co-sponsor Thadd White of the Roanoke-Chowan News-Herald. “Both United Country Joe Murray Realty and the Roanoke-Chowan News-Herald are committed to continuing this tradition of aiding our local student-athletes in their endeavor to further their education.

“We are proud of the support we have received over the past five years and grateful for those who once again giving this year,” he added.

At 4 p.m., the Pungo Christian Academy junior varsity girls will square off with Lawrence Academy. The same two teams will then play in a jayvee boys game immediately following that event.

The varsity games will start at approximately 6 p.m. with the varsity girls of Pungo Christian meeting Bethel Christian. The same two teams will then meet in the varsity boys contest.

Tuesday night will be the semifinals of the varsity tournament. At 4 p.m., Lawrence Academy’s varsity girls will meet Northeast Academy. The same two teams will follow in a varsity boy’s semifinal.

Wednesday night will be the semifinals of the junior varsity tournament. Bethel Christian Academy’s JV girls will start the day at 3:30 p.m. when they meet Northeast Academy. The next contest will see the same two teams in a JV boys contest.

The third game of the night will feature the Ridgecroft School JV girls squaring off with the winner of Monday’s contest and then the Ridgecroft JV Boys will close out the day by hosting Monday’s JV Boys winner.

Thursday night’s consolation games will be played at Lawrence Academy beginning at 4 p.m.

Friday will be championship night at Ridgecroft School, beginning with the JV girls game at 4 p.m. That will be followed by the JV Boys, varsity girls and varsity boys.

At 3 p.m., however, the fourth-place game for the varsity girls will be played at Roanoke-Chowan Community College. That will feature the loser of Monday’s contest against the loser of Thursday’s consolation game.

The same will be true for the fourth place boy’s game, which will follow at RCCC.

Tickets are $5 each and will be available at the door.