WILSON – A year later, it will finally happen.

For the past two seasons, the best two soccer teams in the North Carolina Independent School Athletic Association have been Ridgecroft School and Greenfield School. 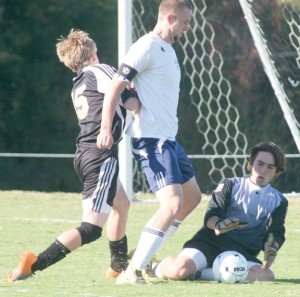 Last season, the Knights edged Ridgecroft in the semifinals in a game that had several bizarre instances.

Friday, however, both Ridgecroft and Greenfield punched their ticket to the North Carolina Independent School Athletic Association 1-A championship game.

The Rams defeated Shannon Forest Christian School 3-0 in the opening semifinal while Greenfield easily discarded Trinity School of Durham by a final of 5-0.

“We came out the first couple of minutes and looked sharp, but then we didn’t have the continuity we usually have,” said Ridgecroft mentor Aron Martin.

The Rams in fact missed several opportunities early, with shots sailing wide on each side of the goal and over the net.

The contest remained scoreless for the better part of 25 minutes before Rams’ senior Aaron Rock scored on an unassisted goal to give Ridgecroft the lead.

Less than five minutes later, the Rams were on the attack again and senior Daniel Early sent a beautiful crossing pass to junior Michael Byrum, who laced a shot into the back of the twine for a 2-0 lead for the Rams.

Ridgecroft remained on the attack for the rest of the first half, but the Shannon Forest defense kept pushing the ball back towards midfield.

Finally, with less than a minute to play in the first half, the Rams were on the attack and Rock found a loose ball in front of the net as part of a scramble and used a solid shot to the corner to give the team their third and final goal of the contest.

The second half saw both teams playing a lot of defense as the ball made its way deep into both ends on several occasions. Ridgecroft goal keeper Jordan Harrell turned away half a dozen shots in the victory.

The win for Ridgecroft, who is seeded number one in the tourney, and the subsequent victory by Greenfield means the top two ranked teams in the state will square off at 4 p.m. today (Saturday) at the Burt Gillette Complex.

The Rams will enter the contest 20-1 this season while Greenfield will enter Saturday’s contest 16-10 with two of those losses coming to Ridgecroft.

Martin said he knows Saturday will be a tough contest with both his Rams and the Knights ready for battle.

“I know the boys will bring their A-game,” he said. “I know they will do everything they can to make sure this opportunity doesn’t slip through their fingers.

“I’m sure Greenfield will have the same mindset,” he added. “This should be one for the ages.”

That contest will open at 4 p.m. with the state’s top 1-A powers squaring off for the biggest prize of their season – a state championship.