AHOSKIE – Another Gillette – and maybe this time without a close shave. 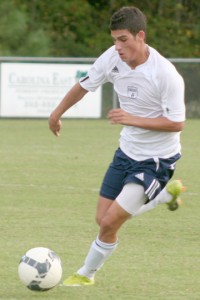 It will mark the Rams’ second straight trip to the Final Four.

Ridgecroft junior midfielder Drey Chrysostomou weaved his way through a three-on-one 17 minutes into the match to score his only goal of the afternoon and break a 1-1 tie as the Rams coasted from there to win their 19th match of the season.

Senior Ryan Beggs led the Rams scoring with three goals – two in the first half – and junior Michael Byrum scored a goal in each half for the half-dozen the host team needed for the win.

Senior Aaron Rock had three assists while Beggs and Chrysostomou had an assist each.  Sophomore keeper Jordan Harrell stopped four shots on goal to get the win in the net.

“We wanted to just put ourselves in a position to just compete in Wilson,” said Rams coach Aron Martin with muted understatement.  “We knew they were going to be a physical team and I admire them because they (Davidson Day) battled until the end.

“I was glad with our composure today,” he added. “I think we’ve come a long way and hopefully that can carry further into the state tournament.”

As they had done in their previous two matches, the Rams scored quickly off the opening kick.  Two and a half minutes in, Rock, on a breakaway, curled a shot toward the net and Beggs finished by firing a strike into the twine for the first goal of the match and a 1-0 lead.

Over the next 12 minutes Ridgecroft had several more scoring opportunities, but came up either wide of the post or just over the crossbar while Patriots goalie Will Reed made a spectacular stop on another.

Davidson Day came back to level the match 14 and a half minutes in.  A corner kick just missed, causing a scramble in the box.  A Ridgecroft defender almost scored an own-goal for the other team before Patriots sophomore Omar Caldwell collected the rebound and kicked it in for the 1-1 tie.

But Ridgecroft wasted little time getting back in front.

Chrysostomou took a crossing pass near midfield and put on a dazzling dribbling display weaving is way through the Patriots defenders.  Surrounded by a trio of Patriots in front of the net he caught the keeper leaning and blasted in the go-ahead shot.

Byrum tried to follow up that goal with an attempt three minutes later, but his bender sailed just wide of the left post; and a Beggs header two minutes later was just over the crossbar.

As the play became more physical, Beggs picked up a yellow card for taking down a Patriot defender, but he would get it back later.

Four minutes past the midway point of the half, Davidson Day broke up an attempt by the speedy Rock forcing a corner kick.  Rock then curled a bender toward the net and Beggs used his height to out leap a pair of defenders for a vicious header and a 3-1 lead.

Ridgecroft’s final score of the half came as Chrysostomou launched a shot that looked to be sailing just past the post; but the speedy Byrum was there to collect the attempt on one bounce and rocketed one past the diving Reed for the Rams’ fourth goal of the afternoon.

Ridgecroft took a 4-1 lead into halftime.

Just four minutes into the second frame, Rock and Beggs worked their magic again on another corner kick bender and this time with Beggs scoring on a bouncer into the net for a 5-1 lead.

As Martin began substituting players, Davidson Day picked up their pace. The visitors got off two shot attempts that Harrell stopped cold and another that sailed wide-left.

Ridgecroft put the nail in the Patriots’ coffin on a corner kick at the 52nd minute mark.  Rock’s corner sailed to Beggs, who put on a spin move that caused the ball to glance off a defender, but Byrum was there to collect the mishap and scoot it in for the final goal of the day.

“We were getting a lotta looks,” said Martin, “and we missed some chances that we normally don’t miss; but when you’re creating then the chances are gonna come.  This was a total team effort.”

“I won’t use the five-hour bus ride (from Charlotte) as an excuse,” said Patriots coach Josh Wagner, “but we did have to make a quick adjustment.  We’re young, but Ridgecroft’s a good team; they played well.”

The win sends the top-seeded Rams to Wilson to face Shannon Forest Christian School at 3 p.m. Friday at Gillette.  It’ll be the Rams’ second meeting with the Crusaders; a club they defeated, 5-0, earlier this season in the Ridgecroft Invitational final back in August at Bryant Field.

“Right now we’re focused,” said Martin, “and with the exception of some tactical information my coaching job is done.

“They are where they are because of their hard work,” he concluded with a smile.  “They’re a team that pleases themselves and they’re doing a super job of it.”