The last time Greenfield School’s soccer team and their fans saw Ridgecroft forward Ryan Beggs he was being red-carded off to jeers from the crowd in the state semi-final at Wilson’s Gillette Soccer Complex.  A match the Rams would painfully lose in overtime. 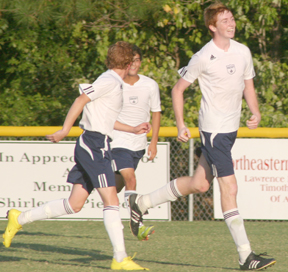 Ryan Beggs (right) smiles with his teammates after one of his three goals against top-ranked Greenfield School.

Tuesday they saw him again, and this time for the full 80 minutes, in which he scored his fifth hat-trick of the year – three goals in the match  – as Ridgecroft downed the Knights, 3-2, at Mike Bryant Field and assumed first-place alone atop the Coastal Plains Independent Conference standings at 2-0.

As a great athlete once remarked: ‘How do I look from here?’

“This was just payback,” said the exhausted senior with a sly grin after the match.  “It means a lot.

Ridgecroft broke a 1-1 halftime tie with a pair of Beggs headers in the second period to notch their eighth win of the year.

“We have to stay grounded,” cautioned Rams’ coach Aron Martin, “because he have to face them at least one more time at their place and I can definitely see both of us meeting again in the state tournament.”

The Knights also played without last season’s playoff hero, midfielder Mark Dandanell, who sat out the match on the bench on crutches from a broken bone in his foot; and fellow-starter, Sam Hughes, who missed the game with a family emergency.

“We’re certainly going to enjoy this for a brief while,” added Martin, “but then it’s going to be getting right back at it.”

The tightly played match was even for the first 17 minutes with each club getting four tries apiece at getting on the scoreboard first.

The defense by Ridgecroft goal-keeper, Jordan Harrell, who had six saves on the day, was only overshadowed by the play in front of him by defense-mates, Nathan Pearce, Austin Britton and Landon Larabee.

The first goal came at the 24-minute mark when Beggs put a spin move on a Knights defender after getting a pass on the right wing and punching it in for a 1-0 Ridgecroft lead.

The play was physical, as to be expected between these two old rivals, with several good, clean tackles in the open field.

However, at the 31-minute mark, Greenfield’s Clayton Stakes was taken down in the box; an act that sent a player for each team off the pitch with a yellow card.

It also meant that Greenfield was awarded a penalty kick which the Knights’ Ben Bradley blasted in from the right side past the diving Harrell and knotted the match at a goal apiece.

Each team had two more tries the final five minutes of the half, but Greenfield had one shot sail wide while Ridgecroft’s Aaron Rock saw his free kick nullified by an offside call.

The second half opened with more physical play, resulting in Greenfield picking up its second yellow-card of the match when the Rams’ Michael Byrum was fouled by Bradley.  The free kick by Rock was grabbed for a spectacular save by Knights’ keeper, Gary Phillips.

At the 62-minute mark, Drey Chrysostomou’s attempt was deflected, but the ball bounced high and Beggs sent a header into the net and the Rams were back in front, 2-1.

Six minutes later, another free kick by Rock sailed high, but the leaping Beggs was able to once again get his team on the ball and  swish it in for a 3-1 Ridgecroft lead.

Greenfield refused to yield, as Stakes scored a goal at the 73rd minute on a pass from Robert Stallings that drew the Knights within a goal of the Rams and sent an eerie silence through the Ridgecroft crowd.

Both teams had opportunities in the final seven-plus minutes. Greenfield drew a third yellow card, but Beggs’ shot was snuffed and with time ticking down, Greenfield’s last attempt sailed over the crossbar.

“They were just better than us today,” shrugged Knights coach Ben Forbes.  “They outplayed us most of the game.

“I thought Beggs was outstanding,” he added.  “What can I say?  They’ve just got a lot of talent and as I said before the season they’re number one and I haven’t seen anything today to make me change my mind.”

“We talked to each other in this game more than any other so far,” said Beggs, “spreading the ball, keeping the ball and passing the ball.  And the defense played really well”.

“There were a few dodgy moments early,” said Martin, “and I think that was nerves, but they calmed down.  In fact, they were a little more calm out there than I was on the sidelines.”

Ridgecroft’s five-game home-stand continues with a Friday match against Oakwood at 4p.m. in their annual Homecoming affair.  Their rematch with Greenfield will be October 8 in Wilson with a third meeting possible in this year’s state playoffs.