A year ago Ridgecroft School began their Coastal Plains Independent Conference soccer season with a pair of ties and a loss. Two of those matches came against ’09 state finalists Faith Christian of Rocky Mount and Greenfield School of Wilson. 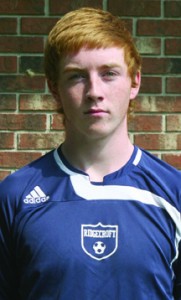 In fact, the Patriots of FCS swept the Rams in both contests last year.

That was then, this is now.

Monday Ridgecroft opened the conference season with a 4-0 shutout of Faith Christian at Mike Bryant Field, breaking open a close match with three second half goals.

A trio of those scores coming on a hat-trick from senior forward Ryan Beggs while fellow-senior Aaron Rock had the other goal and a pair of assists. Sophomore goal-keeper Jordan Harrell had four saves and the Rams defense helped preserve the shutout.

“We just needed to relax and basically wake up,” said Rams coach Aron Martin. “We’ve had some good success early this year and it’s hard to keep bringing that A-game, but that’s the challenge.

“We came out with a good result,” he added, “because we made the most of our chances when we got them.”

The match could easily have been a blowout, but for some formidable goal-keeping from Patriots stopper, Ben Barnes, who had 10 saves.

“We didn’t finish all our chances like we’re capable of,” said Martin, “but he (Barnes) had a lot to do with that.”

Ever the aggressor, Ridgecroft out-shot the Patriots nine-to-one in the first 20 minutes of the match.

Then on their tenth try, at the 18:38 mark, Rock masterfully dribbled past the Faith defense and sent a sweeping pass ahead to the charging Beggs who faked Barnes with a swift move and planted the ball in the net for the 1-0 lead.

At the 11-minute mark of the half it looked as if the Rams would score again off a corner kick, but Barnes turned away a shot by junior Michael Byrum and another by Drey Chrysostomou while still a third attempt hit the crossbar.

Beggs and Chrysostomou had another pair of chances in the final six minutes, but again Barnes and the defense rose to the challenge.

Two and a half minutes into the second half, Beggs scored his second goal of the contest with a well-placed breakaway kick over the outstretched hands of the keeper for a 2-0 Ridgecroft lead.

Faith began to pick it up from there and over a 12-minute period, out-shot the Rams, four-to-three; but defenders Landon Larabee, Austin Britton and Nathan Pearce turned away three of those tries and Harrell stretched out for another to preserve the shutout.

With under nine minutes to play, Rock drew a Faith foul and on the ensuing free kick, curled one over the defense and pushed the Rams ahead, 3-0.

Ridgecroft then turned away the final four FSC shots and lifted their record to 1-0 in the CPIC and 7-1 overall.

“He’s got a lot of horses,” said Faith coach Harold Rackley.  “We were doing the best we could,  and I’m not making excuses, but they were fit and we were tired.”

“We’ve kept our shape relatively well,” said Martin, “both offensively and defensively.  There’re some things we need to work on, but I’m certainly pleased with the result.”

Ridgecroft hosts Epipany School of New Bern Friday before their home showdown with Greenfield next Tuesday.  It was Greenfield who eliminated Ridgecroft from the Independent School semi-finals a year ago.

But this, as said before, is a new year.