Playing in near-90 degree heat and with very few substitutions, Ridgecroft School’s varsity soccer team posted a huge win Thursday at Mike Bryant Field when they knocked off previously unbeaten Pasquotank, 5-3, to earn their fifth win of the season. 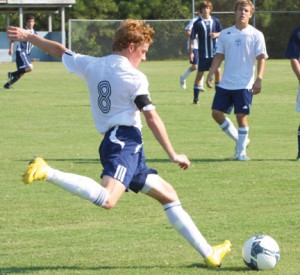 Senior Ryan Beggs scored the first four goals, two in each half, with junior Drey Chrysostomou tallying the final strike in the Rams’ victory while goal-keeper Jordan Harrell had seven saves.

“This (win) was pretty huge,” said Rams’ coach Aron Martin. “They were, surprisingly, a very solid team.  The referees were letting them play so it was a physical match.

“We created a lot more chances,” he added.  “We didn’t finish like we’re capable of finishing, but as long and we’re creating those chances and keeping the pressure on I’m okay with that.”

Indeed, the Rams set themselves up for more chances than the speedier Panthers with crisp ball movement and, more importantly, defensively they closed very quickly on their opponents in the open field.

“The defense played especially solid,” said Martin.  “Landon Larabee had a huge match for us at a wing position and Nathan Pearce and Austin Britton were very solid ion the middle. I don’t know if it was fatigue setting in because we didn’t sub a lot today.

“The only thing I was a little disappointed in was that we let in a couple of weak, soft  uncontested goals there at the end,  but it’s early in the season and I’ve got to say I was pleased with what I saw and the way we were able to dictate play.”

The Rams broke a 1-1 tie at the 18-minute mark when Aaron Rock found the streaking Beggs on the left side and Beggs deftly moved the ball around a couple of defenders before firing a solid shot into the back of the net for a lead Ridgecroft would never surrender.

Despite several good chances that sailed either to the sides of the post or over the crossbar, it remained 2-1 at halftime.

Four minutes into the second half it looked as if the Rams would add to the lead when Michael Byrum sidestepped a defender and raced for the box for what looked like an uncontested dead-on shot.  However, the ball took a quirky bounce on one of his dribbles and his poor angle allowed the shot to sail just wide of the right post.

On the Rams’ next two scoring chances, Panthers’ goal-keeper Austin Whedbee stretched for two flying grabs and smothered the ball both times to prevent a score and with 27 minutes remaining in the match, being played to a stalemate, it appeared the scoring might be done for the day.

Instead, Ridgecroft scored two goals within a seven minute span. Daniel Early found Beggs on the left side and he put a spin move on a defender to notch the “hat-trick” with his third goal of the match.

Pasquotank coach Kevin Deaver made a defensive switch to try and contain Beggs, but at the 19-minute mark of the half he sent an unassisted shot into the twine on one bounce and Ridgecroft had a three-goal lead at 4-1.

That may have been when fatigue set in for the Rams, who’d made just one substitution the entire half.  Pasquotank scored a pair of goals in succession, as Cullen Priest and Robert Veliky snuck a couple into the net, and suddenly it was a one-goal game again, 4-3.

But an insurance goal came with just under eight minutes to play when Chrysostomou took a cross from Byrum, saw the open seam in the Panthers defense and fired a straight-on shot into the net for a 5-3 cushion for the home side that iced the match.

Harrell picked up two more key saves down the stretch and the Rams were 5-0 for the first time in five years.

“Their passing game was great,” said Deaver with an admiring smile.  “They passed circles around us so we know we’ve got a little more work to do.  The refs also didn’t call the match as tight as we’re used to, but I was glad they let them play.”

“They were a fast team,” said Martin. “But I was pleased with our composure.  We’ve got some talent and while we’re not very deep I think our fitness held up pretty well.”

The Rams will host Lawrence Academy on Tuesday at 4 p.m. before a road trip to Cary Christian on September 7.  Their first conference match is September 13 against 2009 NCISAA finalist Faith Christian of Rocky Mount.