It was the Rams’ third win in a row on the young season, after having knocked off Fayetteville Christian on the road last Monday.

In Saturday’s title tilt against SFCS, Ridgecroft broke open a scoreless first half with five second-half goals to cruise to the easy win.

Rams senior Ryan Beggs scored three goals and junior Michael Byrum had the other two.  Beggs and Byrum also had an assist each while juniors Aaron Rock and Drey Chrysostomou got the other assists.  First-year goal-keeper Jordan Harrell registered the shutout.

After playing to a scoreless first-half standoff, the Rams got it going early in the second half.  In the right corner Chrysostomou looked to have been trapped between two defenders before he chipped a nice spiraling ball into the box and Beggs blasted it past the keeper for a 1-0 lead.

Beggs looked in position to score a second goal at the 30-minute mark, but his header sailed just over the crossbar.

Seven minutes later, off a corner kick , Byrum streaked into the box to find a waiting cross-kick from Rock that tickled the back of the twine again for a two-goal Ridgecroft lead.

After a pair of shots from Chrysostomou and Daniel Early went wide, Byrum made a nice swipe of the ball from a defender and sent a cross to Beggs who rocketed it past the outstretched keeper’s arms and got his second goal of the game to make it 3-0. 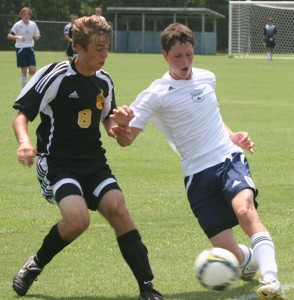 Ridgecroft senior Michael Byrum (right) saves the ball before it heads out of bounds during Saturday’s contest at the Mike Bryant Soccer Field. Byrum and the Rams rolled to the championship win 5-0.

Things really got out of hand for Shannon Forest when Byrum came back to get his second goal of the game 32 minutes in.  Beggs skipped a ball over a defender on two bounces and Byrum’s sure-footed shot nicked the side post and ricocheted in for the fourth goal of the contest.

The final score came on a breakaway as Beggs just outran the defenders and placed one in unassisted from the right side to complete a hat-trick and finish the Rams scoring.

“We came out a little flat and complacent in the beginning and I think it bothered us,” said Martin, “and that’s what I like about this team.  Instead of folding and back-biting and arguing they regrouped and came out made it a completely different second half.

“One of the things we wanted to do,” he added, “was make them chase the ball in the second half and we did that with lots of quick passes and movement off the ball.  The defense was exceptionally solid and my midfielders and front-runners were outstanding.”

“We just fell apart in the second half,” said Crusaders coach Scott Simmons, shaking his head.  “Ridgecroft’s a good team, probably the best one we’ve seen in a couple of years, actually; but we get a little bit of experience playing teams like that.”

In Friday’s first round, Shannon Forest got a shutout with a 4-0 win over Cape Fear Christian.

Ridgecroft has now scored 20 goals in just its first three games while surrendering only three.

The Rams will next be at Bryant Field on Thursday, August 26 when they host Northeast Coastal Conference member Pasquotank, in a 4:30 p.m. kickoff.

MURFREESBORO – It was almost like a day at the county fair. Despite a threat of rain moving it indoors... read more