Leaders recently surprised Winborne as she started her shift on the Medical Unit/2nd Floor at the hospital. Members of her family were also present to be part of the surprise and to celebrate with her.

Fellow colleagues nominated her for this award saying, “Sonia Winborne always demonstrates the highest example of professional behavior regardless of the situation – her care never waivers, in spite of the situation with the patient and is given with the utmost compassion.”

Winborne has been employed with VROA since 2007. She started as an LPN and began working as a registered nurse in the medical unit in 2009. She serves as a charge nurse and a clinical coach to new nurses and students. She is also an electronic medical records ‘superuser’. 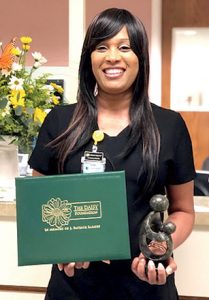 Sonia Winborne displays the gifts she received after being named as a DAISY Award recipient.

“Sonia cleaned, assessed and dressed a wound and cared for a patient with the greatest care, compassion and professionalism,” said another colleague when making the nomination. “The patient was her top priority and never felt that there was an issue with receiving care.”

“Every time I think about Sonia and her compassion for her patients when she is at work, I thank her for being just who she is: a Godsend spirit filled with love,” commented one of her co-workers.

The DAISY Award™ is an international nursing award that recognizes nurses who do all the right things for patients and families.

Winborne received an award certificate, a card, a bouquet of daisies, and also a Healer’s Touch sculpture. Each piece is hand-carved for the Foundation by artists of the Shona Tribe in Zimbabwe.

Cinnamon rolls were shared as a traditional part of the DAISY Foundation.

The DAISY Foundation was co-founded in 1999 by Tena and Bonnie Barnes in memory of their husband and son, Patrick Barnes. During his illness and subsequent death at the young age of 33, Patrick’s family witnessed the incredibly compassionate care of the nurses that cared for him. To honor Patrick’s memory, the Barnes family knew that first and foremost they needed to say thank you for the gifts nurses give their patients and families every day, so they created DAISY Award for extraordinary nurses. An acronym for Diseases Attacking the Immune SYstem, the DAISY Foundation is now an international program recognizing exceptional clinical expertise and compassion. (www.daisyfoundation.org).