AHOSKIE – It was billed as a return to normalcy.

Even though COVID-19 has thrown a proverbial curveball at the world, folks are begging for opportunities to get back to how they lived in 2019. One such unique opportunity found a group of happy young people participating in a few holes of disc golf in Ahoskie on March 18.

The group of 7th to 12th graders and their adult chaperones was from Sandy Creek Baptist Church in Louisburg, all taking part in the Amazing Grace Race.

“The Amazing Grace Race is an idea that came out of church youth groups in Oklahoma,” explained Kaden Williamson, the Pastor at Sandy Creek Baptist Church. “While some churches were going to Colorado on ski trips or Mexico on mission trips during Spring Break, some kids were stuck at home with nothing to do because they didn’t have the means to go on an expensive trip. 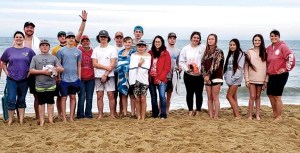 A portion of the Amazing Grace Race participants stand on the beach at Nags Head, the final leg of their trip on March 18. The church group from Louisburg participated in planned activities during their trip to the Outer Banks, including playing disc golf in Ahoskie. Contributed Photo

“In 2008, the Amazing Grace Race was created, a two to three-day race across the state, where kids could experience a once-in-a-lifetime trip within their own state, discovering places they’d never seen and exploring places they may have heard of but had never visited,” Williamson added. “But they didn’t just want it to be all about fun-and-games, so they filled about half of the race with missions-minded service challenges to expose youth to some ministries and organizations who were making a difference in the world that would hopefully inspire them to make a difference when they got back home.”

Williamson said the group from his church spilt into several teams, each consisting of up to five youngsters accompanied by two adults. They departed Louisburg around 8:30 a.m. on Friday, March 18 with 10 planned stops along the way. Various challenges awaited the group at each stop and they could not leave for their next destination until completing the task.

In Ahoskie, the teams were challenged to complete several holes of disc golf at the course located at the Ahoskie Creek Recreational Complex and Amphitheatre.

“The competitiveness of the teams was very evident,” said Ahoskie Chamber of Commerce Executive Vice President Amy Braswell who met the group upon their local arrival. “They played the holes Ahoskie is known for back through the woods. I arrived to find the woods full of joyful shouting and laughter and people darting between trees and dashing through the woods as far as I could see.”

Braswell said she noticed that some had played disc golf before, while others had not.

“But they all thoroughly enjoyed the challenge and being outside on a beautiful day. They loved our course and vowed that they will return to Ahoskie,” said Braswell.

At the completion of their challenge in Ahoskie, Braswell handed each team a sealed envelope containing information about their next destination.

The group eventually made their way to the Outer Banks where they spent the night before embarking on another round of challenges on Saturday as they headed back home.

“It was a truly special trip as our theme was appropriately called ‘Return’,” Williamson said. “Our hope was that as we returned to normal by returning to the race from a COVID break, we would also return the love of Jesus and joy of life to the areas we visited, in hopes of our youth returning one day themselves.”