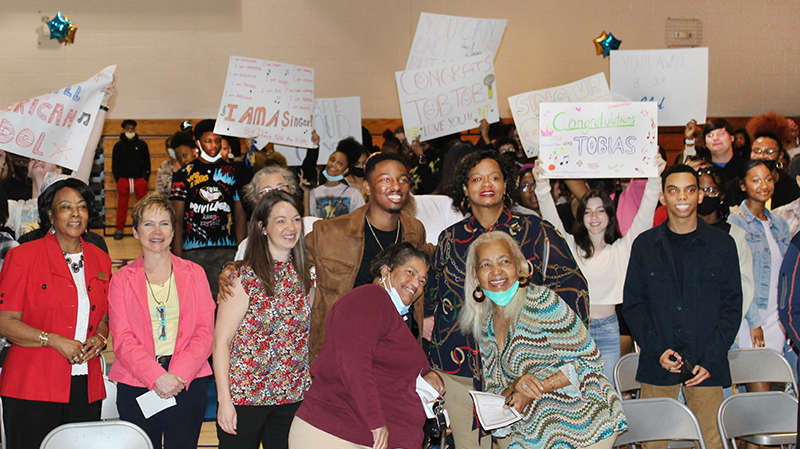 Tobias Hill (second row, fourth from left) was greeted by his local fans upon returning to his alma mater on Wednesday morning after making several appearances on “American Idol.” Staff Photo by Holly Taylor

AHOSKIE – The gym at Roanoke-Chowan Community College isn’t quite the same as a stage in Hollywood, but the cheers there were just as loud and enthusiastic.

Hill, a Como native who graduated from the Early College in 2014, competed on season 20 of the popular singing competition show. In his audition, he earned a Golden Ticket to Hollywood week. During that week, the contestants competed in several challenges – including genre, duets, and showstoppers. Hill made it all the way to the showstopper challenge, but ultimately was not selected to be in the Top 24.

But the end of Hill’s idol journey didn’t dampen the enthusiasm at Wednesday’s event. Current Early College students piled into the gym, some waving supportive signs. Some of Hill’s former classmates attended the event via Zoom. And a few of his former teachers shared words of encouragement.

“Tobias has always been a great kid,” said Lyndsay Britt, Principal of the Early College. “His class was the first class I ever taught as a high school math teacher in this very school.”

“We are so excited for you, Tobias, and so proud of all that you have accomplished,” she continued. “Continue to follow your dreams and encourage those around you.”

Hill was invited to speak to the current students of his former high school.

He urged students to work hard to follow whatever dream they have.

“I came from Como, where there’s literally less than 100 people. There’s no dream that’s too small,” he continued. “You can do anything that you set your mind to.”

Following his speech, Hill performed two songs for the audience: “All of Me” by John Legend and “Knocks Me Off My Feet” by Stevie Wonder. The latter song was the one from his American Idol audition which earned him a ticket to Hollywood. 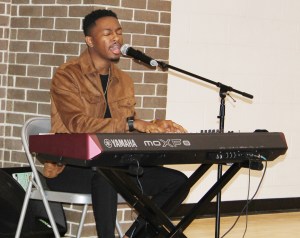 Tobias Hill is shown performing a song during his visit to Hertford County Early College High School from where he graduated in 2014. Staff Photo by Holly Taylor

Early College teachers Jennifer Smyth, Kenyatta Ward, and Michael Kinkead also spoke during the event about Hill, recalling his time as a student and praising the way he’s used his talents for singing and dancing in the years since his graduation.

“His talent is but one of the things that makes Tobias great,” said Smyth, explaining that Hill likes to lift others up and help them shine.

Ward encouraged Hill not to give up by sharing the story of how Formula 409 cleaner got its name. The number represents how many times the inventors worked on the product until they got a batch that was perfect. Ward reminded him that this was only the beginning.

Others who spoke briefly at the event included Hertford County Schools Superintendent Dr. William Wright, Hertford County Board of Education Chair Sheila Porter, and RCCC President Dr. Murray Williams. They all shared encouraging words for the aspiring singer, and congratulated him for his accomplishments so far.

Hill is the son of Tyris and Brenda Hill. He credits his late grandfather, James Albert Long, Sr., as the person who taught him the foundations of music. In addition to being a Hertford County Early College graduate, Hill also earned a degree in music from North Carolina A&T University. He currently works as a music teacher at Southampton County Middle and High School, the music director at Celebration Church in Franklin, VA, and as an office assistant in Murfreesboro.

After Wednesday’s event, Hill sat down with the News Herald to talk about his American Idol experience and his plans for the future.

“Hollywood week was on a whole other level,” Hill explained. “It was scary but I loved it. It was some long nights. Some very long days of filming. But I loved every second of it. That’s the life I want to live.”

Hill said he enjoyed getting to interact with his fellow competitors as well as the show’s celebrity judges Lionel Richie, Luke Bryan, and Katy Perry. He recalled one moment when he ended up in the same elevator as Bryan and Perry. Bryan said he remembered that Hill was the “guy with the nice jacket,” a compliment he had received during his audition.

“I was happy I made an impression,” he said.

In the end, the 100+ competitors were narrowed down to a group of 24 as Hollywood week concluded, and Hill was not selected.

“When I found out I didn’t make the Top 24, it kind of devastated me a little bit,” he admitted. “Because I wasn’t auditioning for myself. I was more so doing it for this community. It’s not every day that somebody gets to go on American Idol, and do something as grand as being on the Hollywood week stage.”

“I was doing it for everybody here,” he continued. “I wanted to show the students that I teach, and the students here, that you can do it.”

Even though his American Idol journey is over, Hill doesn’t plan on giving up his dream to pursue singing. It all goes back to that slogan he and his father follow, the one he shared when speaking to the Early College students.

“Stay humble but hungry,” he emphasized. “Your humility will take you further than your talents, and stay hungry for your dream. Don’t ever quit. Keep pushing and keep striving, and you’ll get there.”