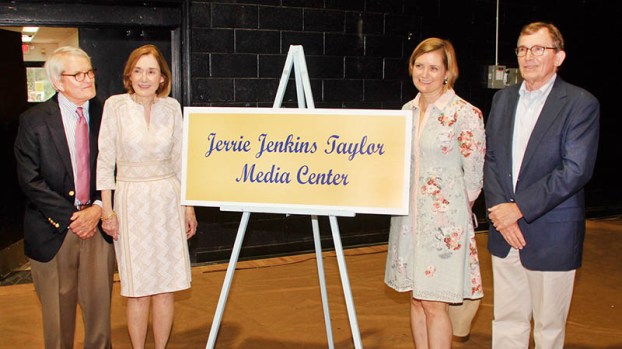 Jerrie Jenkins Taylor (second from left) stands with her husband, Dr. Julian R. Taylor (left), her daughter, Anna Schmeizer, and brother, Joe Jenkins, at the formal dedication that named the Media Center at Ridgecroft School in her honor. | Staff Photos by Cal Bryant

But she didn’t mind it one bit as the longtime school librarian/Media Center Specialist was interrupted on several occasions – from the hugs of her young students – as she made her way towards a sign that bore her name….one which will hang forever on an interior wall at the school.

In a May 17 ceremony that came on the heels of a school-year-ending play staged by young students, it was formally announced that Ridgecroft’s “library” will become the Jerrie Jenkins Taylor Media Center.

Mrs. Taylor, the wife of longtime Ahoskie physician Dr. Julian R. Taylor, has served Ridgecroft School for the past 34 years. She is a 1966 graduate of The Women’s College of The University of North Carolina at Greensboro. She later earned a Masters Degree in Library Science from East Carolina University.

She is the mother of three adult children and is the grandmother of six…..all of whom, she said, “love books and reading.”

Donnie Lassiter, Chairman of Ridgecroft’s Board of Trustees, unveiled the sign as Taylor and her husband finally inched their way forward and arrived where he was standing.

A young admirer gives her favorite librarian a hug at the May 17 ceremony.

After the applause of a standing ovation died down, Taylor humbly spoke of her affection for Ridgecroft, its students, staff and parents.

“Thank all of you for this honor,” she said. “It’s been my pleasure to be your librarian for all these years. Thank you for allowing me to be a part of the life of your children. I treasure each and every day that I come to work.”

Taylor remarked that when she decided to become a librarian she first had to return to school.

“I had to leave my father and my husband in charge of my children (to return to school),” she recalled. “I made up my mind I wanted to do this. Not only have I enjoyed my many years here, I also cherish the many friendships I’ve made. You’re all so very special to me.”

She also touched on an ironic twist in her life.

“The building I was born in later became the Colerain Public Library,” she said. “That was before the hospital in Ahoskie was built, so for those growing up in Colerain back then got delivered by Dr. Cradle in his office.”

Marti Tyler, a longtime friend of Taylor, praised the longevity and work ethic of the Ridgecroft librarian.

“When Jerrie was hired here in 1984, she was truly a librarian in every sense of the word,” said Tyler. “Back then the library wasn’t known as a media center; there were no computers; no powerpoint presentations….there were books, books, and more books, and card catalogs.

“Jerrie, you have evolved with the times, from being a librarian to an exceptional Media Center Specialist,” Tyler continued. “It’s only fitting and proper that Ridgecroft School has dedicated its Media Center in your honor, Jerrie.”

Tyler referenced her friend as a “fitting and proper person.”

“She is loving, charming, witty, bright, talented, an exceptional teacher, a devoted and loving wife, mother and grandmother,” Tyler said as she reeled off Taylor’s strong character traits. “She is a steadfast and caring friend, a devoted member of her church and community, and, last but not least, a loyal North Carolina State Wolfpack fan.”

Tyler noted that many of Taylor’s friends had retired years ago.

“Jerrie told me she felt she couldn’t retire,” Tyler shared with the audience. “She felt like she would become a hermit, never wanting to leave her house. We know that’s not true as we will continue to see her presence here at Ridgecroft School and certainly at the NC State games.”

Tyler added that Taylor’s mission in life remains the same….that of teaching and helping young people.

“Whether it was reading to a first-grade class, helping a sixth-grader with a history project, helping a senior with an essay or term paper, or preparing students for ‘Battle of the Book’ or a Quiz Bowl, or even driving the school van to an academic competition, Jerrie Taylor was there. Her legacy will continue for generations of Ridgecroft students to come because of what she has given.”

And that legacy has a new meaning with the establishment of the Jerrie Jenkins Taylor Endowment. Tyler announced the creation of that endowment last week, one given by a generous and anonymous friend of Ridgecroft School. It is established and managed through the Bertie-Hertford Community Foundation.

“Thank-you Jerrie for giving your heart, your soul, your mind, your energy and your talents to Ridgecroft School,” Tyler remarked. “You truly have made a difference. We are so grateful for the gift of you and for teaching us what Dr. Seuss said, ‘The more that you read, the more things you will know; the more that you learn, the more places you will go’.”