Lawrence won 10-0 as TIC ‘Player of the Year’ Lauren Baker along with Katlynn Stotesberry combined to throw a shutout in the run-rule five inning contest. 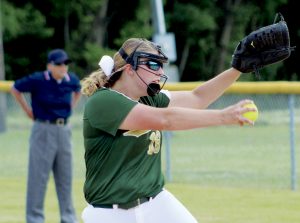 The Warriors fired up the offense in the first inning. Baker drew a walk, stole second, reached third on Gracen Rogers’ base hit, and scored the first run of the game on Rebekah Goodwin’s groundout. Isabelle Phelps then scored Rogers with an RBI single to left field. After Clair Dail walked, both she and Phelps moved up one base before Lindsay Smith drove in both and Lawrence led 4-0 after one.

The Green-and-Gold notched four more runs in the second inning. After Baker and Rogers got on base, Baker scored on a passed ball and Goodwin knocked in Rogers to make it 6-0, Warriors. Dail then drove in Goodwin, and Stotesberry – who’d reached on an error, scored the eighth run on a passed ball. Lawrence was nursing an 8-0 lead after two complete.

Five Raider outs later, Stotesberry induced a groundout from Brandi Garrish to finish off the game – a four-hit shutout.

Baker lasted two innings and got the win, allowing no runs on three hits while striking out two and walking none. Stotesberry recorded the last nine outs in three scoreless innings of relief to earn the save.

Lawrence tallied eight hits on the day. Phelps and Goodwin had two hits each while Baker, Rogers, Dail, and Lindsey Smith has the other safeties.   Baker led the way on the base paths by swiping three.

AHOSKIE – Ridgecroft School avenged a year-old loss to the team that knocked them out of the 2017 NCISAA state... read more