AHOSKIE – The 14th annual Lt. Nick Brantley Scholarship Basketball Tournament concluded here Friday night where the winners were more than what the digits revealed on the scoreboard.

The tournament annually awards college scholarships to deserving student-athletes. There were eight nominees this year: Jeremy Harmon and Madison Dilday, both of Southampton Academy; Jon Stephenson and Carly Ellen Stephenson, both of Northeast Academy; Mattie Grace Gilliam and Blake Birdsong, both of Ridgecroft School; Hailey Hope Gardner of Lawrence Academy, and Brent Benson of Pungo. 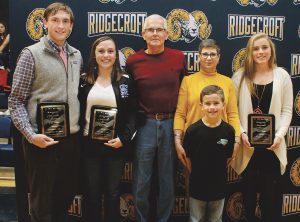 Each nominee is required to rank at or near the top of their class academically, be involved in their communities, write an essay on what makes them worthy of receiving a Brantley Scholarship, and undergo an interview process with the Scholarship Committee.

Three were chosen to each receive a $1,000 scholarship: Madison Dilday, Carly Stephenson, and Brent Benson.

The tournament’s scholarship fund is built through donations, to include those from Jernigan Oil/Duck Thru Stores, Northampton County Farm Bureau, Hertford County Farm Bureau, Shavender Trucking, Bertie County Peanuts, and Joyce and Keith Brantley, the parents of the late Lt. Nick Brantley.

The tournament is sponsored by Joe Murray Realty and the Roanoke-Chowan News-Herald.

Nick Brantley was a graduate of Ridgecroft School, where he was a standout athlete in many sports and also the Valedictorian of the Class of 1997.

After graduating from Virginia Tech in 2001, where he commanded the 3rd Battalion in the school’s prestigious Corp of Cadets, he was commissioned as an Ensign in the United States Navy and immediately began his flight training in Pensacola, FL. He excelled as a pilot and flew both fixed-wing and rotary-winged aircraft.

Tragically, Lt. Brantley lost his life on Sept. 24, 2005 when his Navy Seahawk helicopter went down off the North Carolina coast during a training exercise.