Fortunately for Lawrence Academy, the “threes” fell through the basket at the most opportune times here Friday night in the varsity girls championship game of the inaugural Doug Cobbs Scholarship Basketball Tournament.

Leah Woodard’s trey early in the fourth quarter afforded the Lady Warriors a bit of breathing room at 28-22 and Lawrence went on to claim the tournament title with a hard-fought 32-25 win over Southampton Academy.

Woodard, who finished with a game-high 13 points, was named as the tournament MVP. 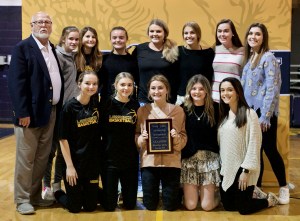 The Lady Warriors held a 30-22 lead inside the final five minutes before a free throw from Erika Shaffer and a basket by Caroline Slate off an offensive rebound got the Lady Raiders to within five points (30-25) with 4:02 remaining.

Neither team would score from the field after that, mostly due to Lawrence opting to play “keep-away” from Southampton. The Lady Warriors repeatedly passed the ball as Southampton gave chase.

Inside the game’s final 90 seconds, Southampton was forced to foul and even though Lawrence was only 2-of-6 from the free throw line down the stretch, it was enough to preserve the win.

Thanks to a trio of three-pointers by Woodard, Lawrence led 19-14 at halftime. They stretched that lead to 22-14 over the opening four minutes of the third quarter where Annie Hayes Trowell connected on a basket while Emma Smith sank one of two free throws.

Sparked by a pair of Slate baskets and one from Ashtyn Dunn off an offensive rebound, Southampton rallied to within 22-20 with 2:11 left in the third period.

But once again, the three-point line was kind to Lawrence as Claire Dail nailed a long-range shot that gave the Lady Warriors an eventual 25-22 lead at the end of the period.

Smith and Clayton were named to the All-Tournament Team, as were Slate, Shaffer, and Emma Belmonte from Southampton.