WASHINGTON, DC – While the sky was filled with clouds and rain on Mother’s Day this past Sunday in the nation’s capital, Owen Black of Murfreesboro was blasting homeruns.

The local 13-year-old was crowned as the Regional 14U Major League Junior Home Run Derby winner. His mother, Michelle Black, said it was the best Mother’s Day present ever watching her son compete and move on to the national finals. 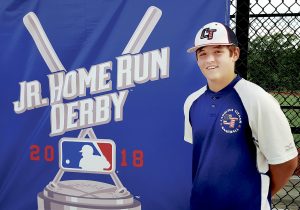 Sunday’s event was held at the Washington Nationals Youth Baseball Academy in Washington, DC. Owen had qualified for the regionals by winning a district event held April 14 in Rocky Mount.

Sunday’s Regional brought in Junior Home Run Derby winners from five different states that included Washington DC, Maryland, West Virginia, Virginia, and North Carolina. There were over of 25 batters competing to be the champion. Each batter received five practice pitches followed by 20 actual pitches with only the top four batters advancing to round two.

In round one, Owen hit the leading total of eight homers to advance to round two. He was the first batter up in round two and smacked a total of 10 homeruns. His effort was not equaled, and he won the event.

By winning one of the eight Regionals Finals, Owen will now compete in the National Finals during Major League Baseball’s All-Star week in July. He will be one of eight batters from the United States that will spend the week in Washington, DC with all expenses paid. His winnings from the Regional included plane tickets, meals, hotels, MLB All Star tickets, custom uniform, custom Louisville Slugger Bat, competing in the finals at Washington Nationals Stadium, batting practice with both American League and National League players, and the chance to be crowned as the National Champion. All of that is a dream come true for a youth baseball player.

“Owen still thinks all of this is not real and is a dream,” said his father, Rodney. “He is excited and honored to represent the Roanoke-Chowan area and his home state of North Carolina.

“Owen offers a special thanks to his coaches past and present that helped him get to this point that include Gary Stevens with the Young Bucks, “Uncle Terry” Edwards with the Young Bucks and Gates County Central Middle School, and current coach Brandon Peebles with the Carolina Titans Blue team from Elizabeth City.

The Major League Baseball Jr. Home Run Derby provides players across the country an opportunity to participate in an exciting home run hitting contest. It is a free national program for boys and girls 14 years of age and under.

The program includes three levels of competition, with top performers from the local level advancing to the regional level and ultimately, the National Finals prior to the Major League Baseball Home Run Derby during the MLB All-Star Week.

For information to host or enter a future event can be found at www.JrHRD.com

LASKER – Despite an early A.M. four-plus hour ride from Iredell County, the Statesville Christian Lions made it a happy... read more