GATESVILLE – They couldn’t even scrimmage five-on-five during practice sessions, but that didn’t prevent the Gates County High School varsity girls basketball team from achieving success during the abbreviated 2020-21 season.

The Lady Red Barons, with only seven players on the roster, have been crowned as the champions of the Albemarle Conference, a feat the program hasn’t accomplished since 2015. 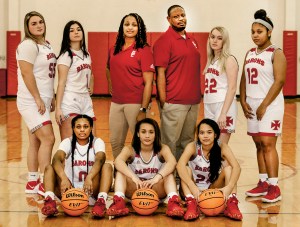 In a regular season where the number of games was limited due to the COVID-19 pandemic, GCHS posted a 6-1 record, with all opponents being Albemarle Conference rivals. The Lady Red Barons lost their season opener on the road at Edenton-Holmes on Jan. 26. They’ve won six straight since that time.

The Lady Red Barons wrapped up the conference title on Thursday of last week on the road where they defeated Camden County, 32-29.

But the season’s two biggest games came on Feb. 10 at Manteo) and Feb. 12 (at home in a rematch vs. Edenton-Holmes).

In their game at Manteo, Cailyn Nowell poured in a game-high 22 points and hauled in 13 rebounds while fellow senior Jaliyah Riddick added 13 points and eight boards to lead the Lady Red Barons to a 40-37 win.

“We’ve been outnumbered in every game, but this group of girls reached deep and found ways to win,” said Melton. “They overcame COVID-related challenges and represented our school and our county extremely well.

“Myself and [assistant coach] Jerome Riddick are extremely proud of their hard work and dedication.”

The Lady Red Barons enter this week’s North Carolina High School Athletic Association’s Class 1-A play-offs as the #7 seed in the Eastern Bracket. They were scheduled to host #11 Vance Charter School (7-2 overall) on Tuesday.

The Gates County High School boys (4-4 overall) also received a state-play-off berth. They are the #12 seed and were scheduled to travel to #5 seed and unbeaten Riverside-Martin (11-0) on Tuesday.