GATESVILLE – A trio of first quarter touchdowns, including two over a span of 98 seconds, was more than enough to extend Gates County’s season as the Red Barons advanced in the NCHSAA Class 1A playoffs with a 34-8 win here Friday vs. North Duplin.

The victory advances the 14-seeded Red Barons (4-4 overall) to a Nov. 12 game at #3 North Moore (9-1 overall). The Mustangs, who finished second in their conference behind Burlington Cummings, had a first round bye in the state playoffs. 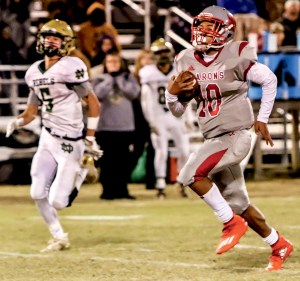 Gates County’s Semaj Cross races past a North Duplin defender en route to a 71-yard punt return for a touchdown, part of a 34-8 win by the Red Barons in the opening round of the NCHSAA State 1A Playoffs. Photo by Charles Revelle

On Friday vs. North Duplin, GCHS hitched its wagon once again to a rugged ground game that produced 380 yards on 53 rushing attempts. Damari Cooper led that effort with 208 yards on 16 carries and three touchdowns. Semaj Cross also enjoyed a triple digit rushing effort as he added 134 yards on 18 attempts. Nasir Jones and Jeremiah Dillard added 26 and 13 yards rushing.

The Red Barons got off to a hot start by scoring on their first possession. There, a 25-yard punt return by Cross set GCHS up at the visitor’s 35 yardline. On first down from that point, Cooper took the hand-off and barreled into the North Duplin secondary where he spun out of a tackle at the 17 yardline en route to a 35-yard TD run. The conversion failed, but the ‘Barons held a 6-0 lead less than three minutes into the game.

Later in the first quarter after the GCHS defense forced a three-and-out, Cross fielded the punt and was off to the races for a 71-yard score. Cooper added the conversion run for a 14-0 lead at the 2:17 mark of the first quarter.

Thanks to North Duplin personal foul penalty during the conversion play, GCHS kicked off from the North Duplin 45 and Makenzie Curry perfectly executed an onsides kick that teammate Denzel Williams recovered at the Rebels 33 yardline. Three plays later, Cooper scored on a 30-yard run. Despite the missed conversion, the Red Barons had increased their lead to 20-0 with 39 seconds left in the opening period.

That score stood at halftime as Gates County turned away a drive by North Duplin that reached the Red Barons 9 yardline. On a 4th-and-3 play from that point, Cooper – now on defense – dropped the Rebels quarterback for a six-yard loss to end the scoring threat.

The Red Barons sealed the win and punched their ticket to the next round by adding a pair of scores in the third quarter to take a commanding 34-0 lead.

After North Duplin’s failed attempt at an onsides kick to open the second half, GCHS started a drive at their own 49 yardline. Runs by Cross and Cooper pushed the pigskin to the one yardline from where Dillard scored on the sixth play of the drive. Dillard added the conversion run to increase the Red Barons’ lead to 28-0 at the 9:32 mark of the third quarter.

Gates County’s next drive also produced a touchdown as they took advantage of a short North Duplin punt to drive 35 yards in five plays capped by Cooper’s one-yard TD run.

Playing against the GCHS reserves late in the game, North Duplin avoided the shutout by driving 86 yards in eight played capped by Donovan Armwood’s 11-yard TD run with 59 seconds left in the game. Armwood added the conversion run.