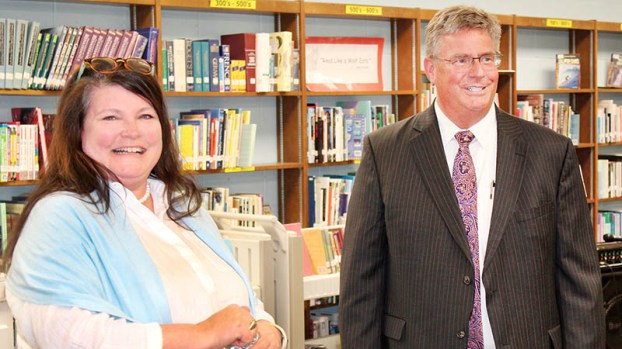 AHOSKIE – You can’t say Melvin Hawkins doesn’t like to stay busy with his career in education.

The former superintendent of the Camden County Schools district and current interim principal at Pasquotank County High School will take over later this summer as the new Headmaster at Ridgecroft School, succeeding Elton Winslow, who had been filling in on an interim basis.

“I had retired, but it’s always good to be wanted,” Hawkins said prior to a meet-and-greet for Ridgecroft parents and students at the school on Monday.

Hawkins, 52, who retired from the Camden school district in April 2017, said he heard about the Ridgecroft vacancy, applied, received an interview and is humbled by his selection.

“I came over, met with the (selection committee), we talked more than once, and here I am,” he stated confidently.

Hawkins is slated to serve as interim principal at Pasquotank County High School through the end of the current school year. He will begin his duties at the Ahoskie school with the new term, overseeing students from pre-school, and K-thru-12.

“I’ve always loved being around kids, and this was a great opportunity.” he declared. “When you’re a superintendent you’re kind of removed from students, which is why you get into education in the first place. This was an opportunity to be around students.”

Hawkins said he took the interim position back in Elizabeth City with the understanding that it would be only through the end of this school year.

“This definitely is strictly a temporary or interim situation,” Hawkins said.

Hawkins, who served as superintendent of the Camden County Schools from August 2010 to April 2017, said at the time his retirement was announced that he was leaving for family reasons and specifically that he wished to spend more time with his parents.

Prior to serving as superintendent in Camden, Hawkins was principal at Camden County High School from 2007 to 2010. Before that he was director of secondary education for the Camden County Schools.

Earlier in his career, Hawkins worked in the Perquimans and Elizabeth City-Pasquotank school districts. Along the way he has earned three degrees from his beloved East Carolina University.

Hawkins points to what he feels is “a lot to be proud of over the years,” noting his 30-plus year career in education.

After serving as principal of a public school with over 800 students, and before that a district with nearly 2,000 students and five schools, Hawkins will over oversee a single private school with an enrollment one-tenth that size.

“This is a smaller environment, and that’s a good thing,” he related. “I remember years ago when I was in Elizabeth City (at Northeastern High School) and asked about what I would change about the school I was at I said take everything of value out, blow it up and start all over. Smaller is better because it gives you an opportunity to know your students, you know their families. Now I’ll be working with people I’ve gotten to know; and, like modeling clay, you get to see the finished product as you’re going through, and you know that in the end you’ve had a part in their success.”

Ridgecroft School will be Hawkins’ first time in a private school setting.

“I know that as a public-school administrator, where I was for years, I never hesitated or shied away from competition from anyone,” he noted. “That’s what keeps us sharp, and what keeps us accountable. While funding will be different and legislation will be different, it still comes down to an opportunity for parents to send their child to the school they believe is best for them. Whatever school you’re at: public, private, homeschool, when you have great teachers, great kids, great administrators, and parental involvement, then you will have success.”

One of the challenges Hawkins wants to tackle is increasing enrollment.

“This is an opportunity to see a school with 250 students grow to 300,” he said. “But you’re adding on, and when you have things that are successful it leads to more success. It may cause public schools to look and say, ‘What are they doing?’, and it might want to make them follow us, instead us trying to follow them.”

Hawkins admits he’s seeing much of the general operation of the school for the first time, and he’s still feeling his way around.

“While I don’t know much more now than what I’ve seen and gathered in just the little time I’ve been over here, but there are opportunities for growth,” he stated. “There’s growth in terms of enrollment, growth in terms of success, growth in terms of program offerings. I’m not coming in saying this is what we have to do, or what I want to do, it has to be a we and it changes the process; you begin gathering those seeds that make it successful, and the more successful (the students) the better.”

While acknowledging he will not alter the brand of Ridgecroft School’s proud tradition, Hawkins wrapped the conversation by saying he will work to keep his institution a school of choice.

“I’ve always said that wherever I am, I want to make it the best; make it the school of choice,” he said. “Now that I’m at Ridgecroft I want to keep (Ridgecroft’s) brand that this is the school of choice. Large schools can be intimidating, and when you have 25 or less in a class, that might be what some folks want and need, and that can be an opportunity to eliminate a barrier. It also challenges the public schools because they are no longer the only show in town. They’re not the only choice anymore, and choice is a good thing as long as parents are involved, then this is going to be the right choice: a chance to attend the school that best fits their need.”

Hawkins says he’s met with Winslow and the pair have had some great conversations.

“It’s a little intimidating to follow someone who has that much experience,” Hawkins said. “I’m appreciative of everything he’s done because he’s got the ship running in the right direction, we’re just going to continue to move it forward.”

JACKSON – Water pressure, or rather the lack thereof, was one of the topics of discussion at the regular meeting... read more