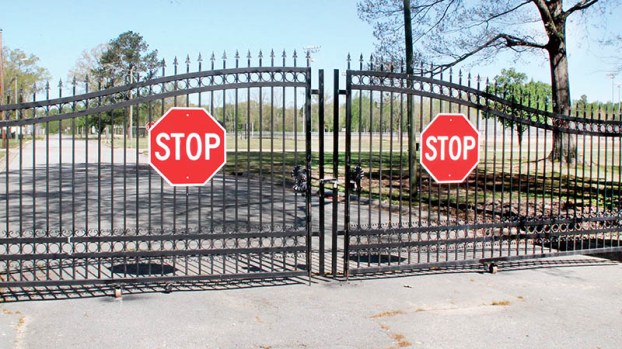 Small but legible placard signs dot the landscape around Ahoskie Creek Park after several former entrances were barricaded over the past few months.

The main entrance to the park will now be on Evans Street, located off Academy Street between Ahoskie Used Tire Sales and the Hertford County Health Department.

Quite a few inquires, including several to the News-Herald, have been made over entrance access to the park. Eventually, a huge sign will be erected informing motorists of the pathway.

Part of the delay has been gaining an encroachment agreement from the North Carolina Department of Transportation to place the sign at a location on a state-owned thoroughfare.

“We’ve met with the DOT about a sign going into the park on Evans Street and they have given us a verbal agreement allowing us to place a sign there,” said Town Manager Kerry McDuffie before the Ahoskie Town Council at their April 9 meeting. “We’re now waiting on a written agreement and a price estimate from Stitch-Count on doing a sign there.”

McDuffie says the proposal is for a 4’ x 6’ plastic frame, PVC-pipe design sign placed there on the east side of (NC Hwy) 42 on Evans Street.”

Mayor Jimmie Rowe asked McDuffie and his staff to ‘fast-track’ getting the sign in place and closely monitor the progress because of a general lack of communication to park users over the entranceway.

“If we can get that sign up I hope that can help alleviate some of the confusion about (former entrance) Memorial Drive,” said Rowe. “I was surprised that very few people knew about that and we need to let them know that there is a sign going up on Evans Street to let the traffic in back there.”

Mayor Pro Tem Rev. C. David Stackhouse said his church had recently sponsored an Easter Egg Hunt around the Amphitheater area, and it was well attended.

“We had great, great crowds,” Stackhouse acknowledged. “When people tell me they can’t get to the park and I tell them Evans Street is now the main entrance they say, ‘What street? … I’ve lived here all my life and I didn’t know that’. Well, I tell them we’ll have a sign coming soon.”

Councilwoman Jamie Burns reminded those attending that the original plan all along was for Evans Street to be the park’s main entrance.

Ahoskie Youth Baseball will begin its season next week (April 24) at the park’s three baseball fields and Councilman Matt Bradley warns there could be some early confusion, especially for motorists used to the Camlin Street or Memorial Drive entrances.

“There’s going to be a lot of traffic coming in and out of there,” Bradley said. “A lot of them will be coming in from out of town and they may not know about the re-location of the entrance.”

“If we were putting a sign up on town streets, then it would be no problem,” McDuffie interjected. “But any sign on a DOT road has to go through them. If you’re going to have a sign that’s more than two-feet wide, then it has to be behind a ditch, according to DOT, and it has to be on more than one post.”

The Town Manager pointed out the roadway (Academy) is 100 feet wide, so that’s 50 feet from the center line, and that’s the distance that’s required. He added that it might be quicker to get permission from landowners rather than a state entity.

While Council agreed a permanent sign would have to eventually be erected, there was also some discussion of a portable, mobile sign being temporarily put in place.

Greg Phillips, an area homeowner, offered a portion of his property off Memorial Drive for temporary signage indicating the Evans Street entrance.

“I’m willing to do it for a year,” he joked. “I already have to give directions to folks riding around confused and that seems to be the biggest problem, they just don’t know where to go. I think that’s the frustration: people just don’t know. It’s tough to change the habit because it’s been 10 years.”

While neither accepting nor rejecting the offer, McDuffie later said as far as right-of-way, the town already owns a number of the streets adjacent to Vidant Roanoke-Chowan Hospital. He just said he wished there’d been a similar offer from a property owner located off Evans Street.

Another resident thanked Council for the decision saying it will take some getting used to, but residents are delighted over the reduction in thru-traffic. She did point out that there has been vehicle speeding around the Lakeview-Edgewood circle, despite two deep pavement dips within the oval.

“There are things we can do to calm down traffic,” McDuffie stated. “We have talked about making the circle one-way, going counter-clockwise, making the inner portion for pedestrian-foot traffic and the other part of the roadway for vehicles. When you narrow that width down you actually slow traffic down; people go faster on streets where there is no center-line.”

McDuffie also warned that making improvements to the circle would mean taking it off the town’s Powell Bill map. The Powell Bill provides funds raised from gas tax to municipalities for resurfacing of streets within its corporate limits, but may also be used for maintaining, repairing, constructing, reconstructing or widening of any street or public thoroughfare. The Town Manager said Ahoskie receives about $150,000 annually in Powell Bill funds.

The mayor then asked for a motion to remove the Lakeview-Edgewood Circle and Evans Street off Ahoskie’s Powell Bill map. The motion was made by Stackhouse and seconded by Bradley and it passed unanimously.

“With the closing of Camlin we’re finally delivering to the residents of that area what they were promised years ago; that Evans Street would be the park’s main entrance,” said McDuffie.

The Town Manager was later asked about another complaint received at the News-Herald: the closed bathroom facilities located near the Amphitheater due to a lack of running water.

“There was a problem with those facilities during the first week of April,” McDuffie noted. “That has since been corrected and fixed by Town Maintenance, and we apologize to those who were inconvenienced for the time they were not useable.”