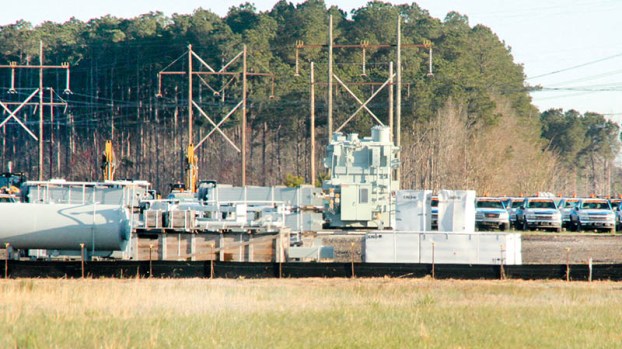 Construction material, along with a large fleet of equipment, is currently being staged along Joe Holloman Road, off NC 11 near Millennium, where the one of the state’s largest solar facilities will be built. | Staff Photos by Cal Bryant

MILLENNIUM – Hertford County is experiencing a huge jump in population….that is if you count solar panels as permanent residents.

The number of panels is expected to increase by nearly 400,000 very soon with the recent announcement by Fifth Third Bancorp, saying it has become the first Fortune 500 Company and first bank to sign a power purchase agreement to achieve 100 percent renewable power through a single project. This power purchase agreement will lead to the construction of an 80-Megawatt (MW) solar project in Hertford County.

To commemorate, Fifth Third is hosting a groundbreaking ceremony at 3 p.m. on Monday, March 26 at its future site, the Aulander Holloman solar facility, located at 208 Joe Holloman Road, Aulander, off NC 11 in the vicinity of Oak Grove Baptist Church. The public is invited to attend.

This project will be the largest in Hertford County, covering nearly 1,200 acres and may utilize approximately 390,000 panels. Rated at 80 MW, the local project ties it with three other solar farms as the largest in the state. The others are located near Conetoe, Morven, and Hope Mills. 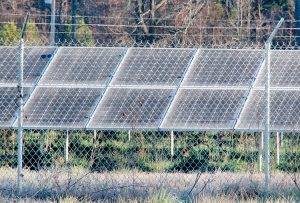 The new facility will use up to 400,000 solar panels, much like the ones now in place as shown here near Aulander Medical Practice on Hollowell Road.

The addition of Joe Holloman Road project brings the number of solar facilities in Hertford County to 13. Prior to Fifth Third Bancorp’s recent announcement, the largest solar farm in Hertford County (a 27 MW facility covering nearly 260 acres) is located off Wises Store Road near Murfreesboro.

According to the Hertford County Planning & Zoning Department, of the 12 solar facilities currently in operation, three are located in the same area of the new project: 1216 B NC Hwy 11 South; 116 Hollowell Road; and 146 B West Brickmill Road. Each of those is rated at 5 MW and they combine to cover nearly 127 acres.

The Aulander Holloman solar project will be a ground-mounted solar photovoltaic facility. It will be designed, built and owned by SunEnergy1, based in Mooresville, NC. They will build a collector-station at this facility to interconnect it to the electrical grid. The facility will have a six-foot security fence that will encompass the property and 40-foot security gates for access to the site.

SunEnergy1 is also the service contractor for two other solar sites currently in operation in Hertford County: 951 River Road, Winton; and 146 B West Brickmill Road, Aulander.

In a press release from Fifth Third Bancorp, this new project in Hertford County will bring 1,000 jobs during the construction phase. Upon completion later this year, the facility will generate roughly 194,000 MWh per year of electricity and help avoid 144,000 metric tons of greenhouse gas emissions annually. This is equivalent to the annual emissions from more than 21,600 homes or 30,800 passenger vehicles.

“Fifth Third Bank is proud to break ground on the Aulander Holloman solar facility and celebrate our commitment to being an environmental sustainability leader,” Tom Heiks, president of Fifth Third Bank in North Carolina, stated in a press release. “This innovative project will reduce Fifth Third’s carbon footprint and benefit the communities we serve.”

“This is the first time that we have seen a corporation move to 100 percent clean power by purchasing all of the output from one project,” Habul stated in the press release. “When complete later this year, the Hertford County Aulander Holloman facility will be one of the largest solar projects in the US; it will provide an important economic investment in North Carolina; and it will lead to a meaningful and measurable difference in carbon emissions. The Earth is our vehicle through time so we congratulate Fifth Third for showing that companies can cut their emissions and improve the health of our environment today through solar power. We urge corporate America to stand up and join the 100 percent club.”

In celebration of their commitment to renewable power, Fifth Third Bank is providing grants to Hertford County Public Schools and Raleigh-based NC GreenPower to promote their sustainability initiatives and solar projects targeted to K-12 schools.

Jewanna Gaither, a spokesperson for Fifth Third Bank, told the Roanoke-Chowan News-Herald that those $1,500 grants (one to each entity) will be awarded within the next 30 days.

Additionally, Gaither said SunEnergy1 has formed a partnership with Roanoke-Chowan Community College to offer internships and jobs to electrical students and provide them an opportunity to be involved in the construction of the solar site.

Scott Hassell, Fifth Third’s vice president and director of environmental sustainability, said, “Fifth Third has worked for years to become more sustainable by using energy more efficiently and by lending to the solar energy industry. Today we take great pride in becoming the first Fortune 500 company and first bank to sign a long-term agreement to buy as much solar power as we use in a year. And we are thrilled to be on track to achieve our 100 percent goal in 2018, four years ahead of schedule.”

To emphasize Fifth Third’s commitment to renewable energy, the bank joined both RE100, a corporate leadership initiative led by The Climate Group in partnership with the Carbon Disclosure Project, and the Business Renewables Center.

“We applaud Fifth Third for joining RE100 and for becoming the first member company to contract for 100 percent solar power,” said Amy Davidsen, North America executive director, The Climate Group, which leads the RE100 initiative. “By achieving its 100 percent renewable energy goal four years early, Fifth Third is demonstrating that there is a strong business case for solar, that corporate leadership on renewables is accelerating, and that faster greenhouse gas emissions cuts are possible. This will inspire more companies to follow suit.”

According to the Solar Energy Industries Association,

the U.S. solar market expanded in 2017, adding double-digit gigawatt solar photovoltaic (PV) additions for the second year in a row. The solar industry installed 10.6 gigawatts (GW) of new PV capacity in 2017, led by strong growth in the corporate and community solar segments.

California and North Carolina remain the two largest solar states after adding the most and second-most capacity in 2017, respectively.

While overall growth was down from the 15 GW installed in the record-shattering 2016, last year’s capacity addition still represents 40 percent growth over 2015’s installation total. Between 2011 and 2015, PV capacity grew steadily from 1.9 GW to 7.5 GW.