MILLENNIUM – The Hertford County Sheriff’s Office is currently searching for a lone suspect following a robbery that occurred today (Monday) at the Southern Mart in Millennium. 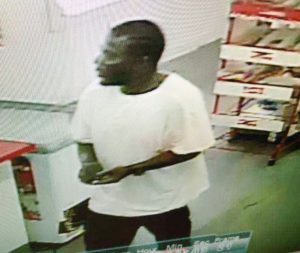 A surveillance camera at the Southern Mart in Millennium shows an individual believed to be the suspect in Monday morning’s robbery.

Sheriff Dexter Hayes told the Roanoke-Chowan News-Herald that a black male entered the store around 10 a.m. He approached a store employee, striking them in the face and then stealing an undisclosed amount of money.

The suspect was said to have left the store’s property on foot.

No firearm was involved in the robbery.

“The suspect is a regular customer at the store,” Hayes said, adding that he was not yet at a point to release the suspect’s name pending further investigation.

The Sherriff said a K-9 unit was able to detect a track, leading deputies back towards Aulander.

The News-Herald will have more on this breaking story as additional information is made available.