MILLENNIUM – No matter how far he roamed, even to the battlefields of Vietnam, Johnnie Ray Farmer’s heart always belonged to Hertford County.

Perhaps it was only fitting while on his native soil – inside his Millennium home – that the much-admired and highly respected former solider, teacher, and county commissioner drew his final breath here early Saturday morning. He was 70 years old.

Farmer’s long history of serving others began with his 23-year career in the U.S. Army, retiring in 1992 at the rank of Sergeant Major.

Upon returning home, Farmer opted to serve again….this time for 13 years as an Army Instructor for the Junior ROTC program at Hertford County High School. It was there that he forged a lasting friendship with his new commanding officer – U.S. Army Major (Retired) Wallace White.

“We met at the same interview for the JROTC program,” White recalled. “We both noticed that our military careers were the same, we were both Infantryman. Our careers were devoted to training young men to become professional soldiers. After being hired we were given our report date to the high school to begin our new mission statement given by the Army.…‘to motivate young people to be better citizens’.” 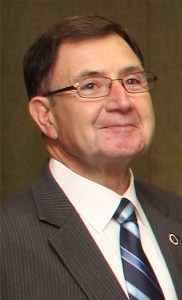 Johnnie Ray Farmer served 18 years as a Hertford County Commissioner and as the Commander and Adjutant of American Legion Post 102. File Photo

White remarked that he and Farmer worked side-by-side in the classroom and by taking their Cadets to summer camps at Ft. Jackson, SC and Ft. Bragg, NC, exposing them to military life, leadership and team building skills, mental and physical challenges, development of interpersonal skills, communication skills, social skills, and the importance of diversity.

“We made a profound impact on thousands of Hertford County students,” White said. “We taught students valuable lessons that would guide them to make wise and meaningful choices that would lead to their success.”

“Johnnie was a devoted friend, and fellow soldier whom I will miss sorely. Our lives were so similar and paralleled each other from childhood. We both grew up in Hertford County during a time of segregation and both grew up on farms, drove buses in high school, graduated, and became soldiers during the same timeframe. We both retired with 20 years of honorable military service before our lives came together at HCHS to become lifelong dear friends,” Major White closed.

With the word “retirement” missing from his vocabulary, Farmer embarked on yet another career by throwing his hat into the political arena. First elected in 2000, Farmer served 18 years as a Hertford County Commissioner. There he led the board on occasion at its chairman and vice-chairman.

At the opening of Monday’s (April 6) scheduled meeting, the current Commissioners paused for a moment of silence in memory of their former colleague.

“Commissioner Farmer served his county and his country with honor for many years,” said Chairman Ronald Gatling. “He dedicated himself to the citizens of this county, this state and this nation and he did so honorably.”

Gatling then read aloud a resolution, one praising Farmer for “a life of outstanding service and extraordinary contributions to Hertford County.”

That resolution, approved and signed by each Commissioner, was presented the same day to Farmer’s wife, Paula, at her residence.

Additionally, the flags in front of the Hertford County Courthouse were ordered to be flown at half-staff.

It was through his role as a commissioner that Farmer developed a keen interest in the improvement of local mental health services as well as transportation, serving in the latter capacity as the first-ever Chairman of the Peanut Belt Rural Planning Organization as well as representing his home county on the Tri-County Airport Authority.

“I remember the first time I ever met Johnnie Ray, we hit it off right from the start and we shared some great times together,” Hunter recalled. “He took me under his wing and I’m a better person for it. He gave me great advice.”

Hunter called his now late friend and colleague, “a true champion of improving mental health and transportation in our county and in the region.”

“He loved what he did and was passionate about the betterment of Hertford County and our neighboring counties as well,” Hunter stressed. “He was really good at networking with leaders here in our region and at the state level. He had a gift to communicate in a simple manner that everyone could clearly understand.

“I’m not ashamed one bit to say that I loved Johnnie Ray Farmer. He was my mentor, my colleague, and my friend. To his family, thanks for sharing him with us. Our county is a better place because of him,” Hunter stated.

“What a great man…from the day when I first met him you could easily tell how much love he had for Hertford County and its citizens,” Vaughan said. “He always had a smile on his face and would go out of his way to help you.

“What really amazed me was to go to his Facebook page and see photos of some of his former JROTC cadets at the high school, many who are in the military today, when they would visit him at his home,” Vaughan continued. “Some of those came from out of state, that shows the love and respect they had for Johnnie Ray. We’ve all lost a great man who will truly be missed.”

Outside of politics, Farmer proudly served local American Legion Post 102 for 28 years in various capacities, including playing a key role in an effort to revitalize Legion baseball in Ahoskie. Today, Post 102 has continuously fielded junior and senior teams consisting of 13-to-18 year-olds from Hertford, Gates, and Northampton counties, an effort that landed Farmer in the North Carolina American Legion Baseball Hall of Fame.

Farmer was serving as Post Commander when the local Legion Chapter took possession of the old News-Herald office on McGlohon Street. He helped orchestrate a remodeling effort to that building, now the home of the Parker Veterans Center.

“Johnnie Ray was always very active, doing all he could to push the activities of Post,” said current-day Post 102 Commander James Hutchinson. “He went on to serve as our Adjutant, which is the most important job at Post 102. The Adjutant keeps up with all records and membership information. He did that very well for at least 15 years.

“Johnnie Ray’s leadership was outstanding, and his love for the American Legion shows everywhere,” Hutchinson continued. “As the Commander, I knew I could depend on Johnnie Ray having the answer to any question that came up. The Post meeting room is named the “Johnnie Ray Farmer” meeting room because of his service to Post 102. He will never be forgotten by our Post members. He was a well-trained Sergeant Major who knew how to get things done.”

“He loved the game of baseball,” Towell noted. “Between him and Wayne Meeks, they’re the reason why we have American Legion baseball today in Ahoskie.

“He loved talking about Ahoskie Post 102, anytime we went anywhere in the state to play a game, that’s what he always talked about…..going back to the 1960’s and the time when Catfish Hunter played for Post 102. He loved to share old stories about baseball,” Towell stressed.

The coach added that Farmer rarely missed a Legion game at home where he served as the PA announcer.

“God, Paula, his family, the Army, and American Legion baseball….they were his passions in life,” Towell remarked.

Farmer’s obituary can be found on page 6 of today’s edition.