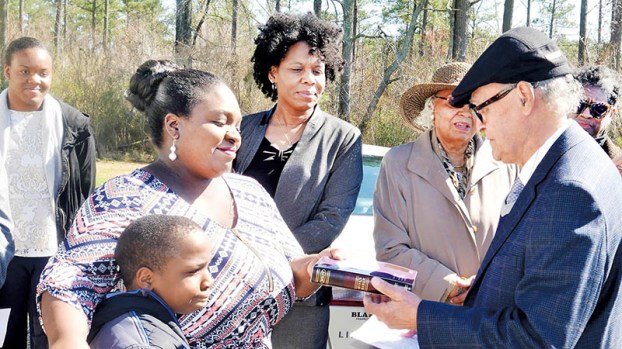 The Rev. William Reid (right) of Meherrin Native American Church hands a Bible to Shavonda Smith at the March 18 dedication of her new Habitat for Humanity home in Ahoskie. | Photos by Bill DuPre

AHOSKIE – As a bright sun shone on her new home, Shavonda Smith accepted a Bible, a key, and the good wishes of the Hertford County Habitat for Humanity affiliate on Sunday, March 18.

Smith and her two children also showed off their three-bedroom, two-bath home that stands among a scattering of new homes on Deer Circle in Ahoskie.

The tidy house, nicely equipped with a spacious kitchen, textured walls and wood floors, was built with funding from the State Employees Credit Union Foundation’s Mountains-to-the-Sea Challenge to build a Habitat home in each of North Carolina’s 100 counties. The 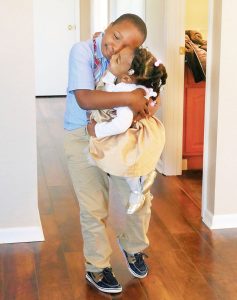 Jayden, 9, gives his sister Mia, 3, a hug as they welcome visitors to their new home in Ahoskie. Shavonda Smith says her two children were helpers as the three-bedroom house was being built on Deer Circle.

Foundation has put up $10 million to fund the three-year project. Once the homeowner accepts a no-interest mortgage from SECU, the organization returns the funds to the Habitat affiliate to build another home. The Hertford County affiliate plans to build two or three more homes near Shavonda Smith’s new residence.

It has been a two-year journey for Smith, an eighth-grade science teacher at Hertford County Middle School who is working on a master’s degree in education to augment her BA in chemistry. To qualify for a Habitat home, an applicant must have a solid work history, a good credit rating and be willing to put 400 hours of “sweat equity” – manual labor – into the home.

In that, Smith proudly points to her two young children, Jayden, 9, and Mia, 3. Both did their small parts as the walls went up – and both knew exactly where their rooms would be.

“It’s awesome to be a homeowner,” Smith says, beaming. “Every day, the children were actually a part of the building process.”

The Rev. William Reid of the Meherrin Native American Church presented Smith with a Bible and a key to the house.

“God has not only given you a house,” Reid said. “But he’s given you a key, the Bible. This key is a key to the house, but the Bible is the key to the soul and the heart. You keep your beautiful smile because that is truly God-given.”